Single mothers worry if their exes receiving payouts for kids 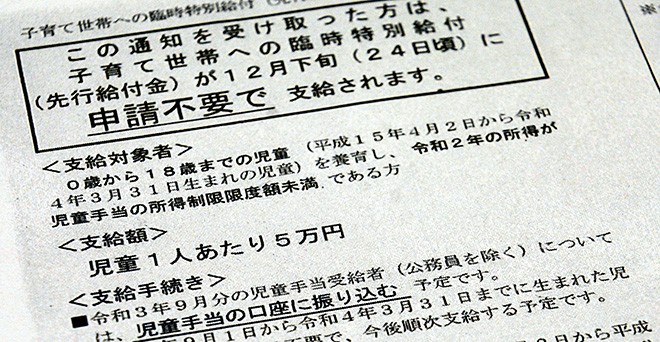 A letter sent to households eligible for the central government’s 100,000-yen handout on Dec. 17 in Nagoya’s Naka Ward (Chika Yamamoto)

A 27-year-old woman who resides in Aichi Prefecture is one of the many single mothers who are falling through the cracks in the central government's 100,000-yen ($880) COVID-19 relief handouts for children.

The funds were apparently sent to her ex-husband, who has no responsibility for parenting.

These women and support groups for single parents are expressing concern that the relief payouts are ending up in the wrong hands.

The single mother in Aichi Prefecture was told by a city official that the 100,000 yen would “be deposited into a bank account registered to receive a child allowance as of September.”

The government will use the existing child allowance system to dispatch the handout to bank accounts via direct deposit for children who attend junior high school or are younger.

The woman divorced at the end of August and has been raising two girls--a second-year elementary school student and a 3-year-old--on her own since then.

She changed the bank account registered to receive a governmental child allowance from her ex-husband’s to her own in mid-September.

The change was applied to the October payment for the first time.

She saw the city post on its website that notifications were mailed as of Dec. 8 to those who are eligible to receive the 100,000-yen handout.

But she has yet to receive the letter after a week had passed since the date.

She wondered if her ex-husband’s bank account is still linked to the system, and she called the city government on Dec. 16 to find out.

A city official then told her that the city “cannot make a change” and she “should ask her (ex-husband) to give the 100,000 yen to her.”

The woman was infuriated, saying, “If I could ask him that, we would not have been divorced.”

A city official told the Asahi Shimbun, “The central government has clearly specified that we will use a bank account registered as of September.”

“We feel sorry for (the woman) but we don’t have much of a choice,” the official said.

An official of Hamamatsu said the city has received similar inquiries.

“Because it is a central government's system, it is difficult for a local government to change it on our own,” the official added.

The central government uses the child allowance system because local governments have already made a list of eligible people and their bank account information so that it can pay the 100,000-yen benefits without recipients having to file an application.

When the central government handed out 100,000 yen to all residents in Japan as a COVID-19 relief measure in spring 2020, people were asked to file an application by mail or online, which delayed the payments and garnered criticism.

An official of the Cabinet Office said, “This time we were particularly concerned with swiftness.”

High school students who are not eligible for a child allowance, which are paid to families with children up to junior high school age, will be required to file an application to receive the 100,000-yen handout, though.

A child allowance is paid three times a year, in principle, which is a deferred four-month payment.

In the most recent past, a child allowance from June to September was paid in October.

A person who maintains a child’s livelihood is required to file an application and receive a payment.

In a family with two parents, the husband typically files an application and receives a payment.

In cases where the parents get divorced and the mother is raising a child, she needs to report to a local government to change the bank account information.

In November, the central government decided to hand out 100,000 yen to children as a COVID-19 relief measure for households with the primary breadwinner making less than 9.6 million yen annually.

If a divorced parent did not change the bank account information following a divorce by the end of August when the list was confirmed, the 100,000-yen handout will be deposited to an ex-husband’s bank account.

Shiho Tanaka, who heads Single Parent 101, a group that supports single parents in Shizuoka, said, “For what purpose is the handout if it will be deposited to the accounts of people who are not raising a child?”

Chieko Akaishi, who chairs Tokyo-based support group Single Mothers Forum, said, “It is problematic that the handout will not be delivered to the people who are struggling the most,” although she praised the government’s decision to aim for making swift payments.

The more recent a person got a divorce, the more likely the person has not secured a permanent residence and employment.

By saying that, Noda encouraged local governments to respond to the situation with a subsidy without making a change in the system to pay the 100,000-yen handout.

Akaishi said, “It will depend on local governments if the person concerned will be assisted or not. I want the central government to show its response.”

(This article was written by Shino Matsuyama and Chika Yamamoto.)