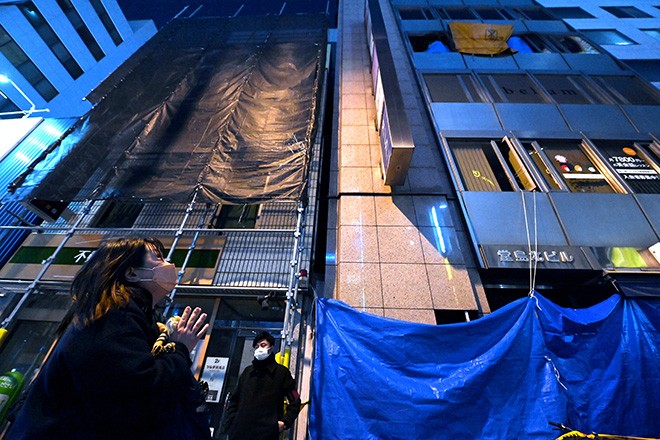 A woman offers a prayer on Dec. 19 in front of a building housing a clinic that was set on fire in Osaka’s Kita Ward. (Satoru Ogawa)

OSAKA--The man suspected of setting the fire at a psychiatric clinic here that killed 24 people bought gasoline in containers in late November, an indication the arson attack was premeditated, investigative sources said.

Osaka prefectural police also said two canisters of tear gas spray were found in the pockets of the suspect, Morio Tanimoto, after he was taken to a hospital in a state of cardiac arrest after the fire was set at the Nishi-Umeda Kokoro to Karada no Clinic in Osaka’s Kita Ward on Dec. 17.

He apparently hid them to avoid questioning by police if they had stopped him while he was carrying the gasoline to the clinic by bicycle, the sources said.

Tanimoto, whose occupation and address are still unclear, bought the gasoline near a house that he owned in Osaka’s Nishi-Yodogawa Ward, according to the sources.

An ID must be presented to gas stations when an individual buys the fuel in containers. Tanimoto did so, the sources said.

Remnants of an accelerant were found near the entrance of the clinic where the fire started, and police said it was almost certainly gasoline, given how quickly the blaze spread.

According to witnesses and surveillance camera footage, a man believed to be Tanimoto arrived at the clinic around 10:15 a.m. on Dec. 17. He kicked over two paper bags containing gasoline to let the fuel spill over on the floor near the clinic’s entrance, and then ignited the fire with a lighter.

Police found a burned cigarette lighter inside the clinic after the fire, investigators said. Tanimoto did not have any ignition device with him when he was taken to hospital.

Police said Dec. 19 that eight more of the deceased have been identified, including Kotaro Nishizawa, director of the clinic.