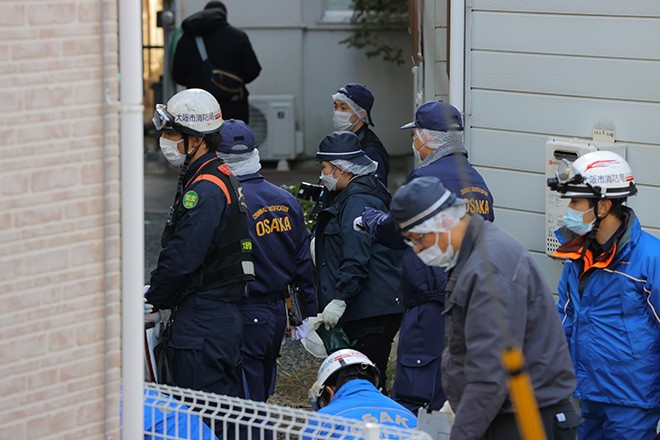 OSAKA—The suspect behind the fire at a clinic here that has now killed 25 people appears to have taken an interest in the deadly arson attack in Kyoto in 2019, investigative sources said.

In a search of a fire-damaged three-story house owned by the suspect, Morio Tanimoto, in Osaka’s Nishi-Yodogawa Ward, police found a newspaper article published in July this year about the second anniversary of the Kyoto arson-murder case, according to the sources.

Police believe Tanimoto, 61, has been interested in the Kyoto attack for at least five months and may have copied the tactics of the arsonist, the sources said.

The suspect in that case, who has been indicted on multiple murder charges, spread gasoline near a circular staircase in the studio, investigators said.

Gasoline was also apparently used in the Dec. 17 attack at the psychiatric clinic in a multitenant building in Osaka’s Kita Ward.

In both cases, the fire and smoke spread so quickly near the entrances that the people inside could not escape.

Police also found a memo in Tanimoto’s house that included the words for “fire hydrant,” the sources said.

The suspects in both fires suffered serious injuries. Tanimoto remains in critical condition.

The cause of death in all 25 fatalities was carbon monoxide poisoning, police said.

Tanimoto’s house is located about 3.5 kilometers from the multitenant building. He moved back to the home about a month ago, sources said.

A fire believed to have been deliberately set broke out at the house about 30 minutes before the blaze at the clinic. Part of the house’s second floor was damaged.

In the search of the house, police found a 2-liter container holding a liquid that smelled like gasoline.

According to sources, Tanimoto bought about 10 liters of gasoline at a petrol station near his house in late November.

Purchases of gasoline in a carry-out container require the customer’s ID and an explanation of how the fuel will be used.

Tanimoto showed his ID and told station staff that he “will use the gas for a motorcycle” and “to fill a torch lamp,” the sources said.

But there are no signs that he actually owns a motorcycle.

The ID requirement took effect after it was learned that the suspect in the Kyoto arson attack had bought gasoline in containers.

Police said Tanimoto’s false explanation and purchase of the gas show that the attack was premeditated.

According to security camera footage and witness accounts, a man believed to be Tanimoto rode a bicycle to the building. The man carried two large paper bags believed to hold containers of gasoline, entered the building and reached the fourth-floor clinic around 10:15 a.m.

He then kicked the bags over near the clinic’s entrance to spread the fluid before setting it ablaze with a cigarette lighter, police said.

After Tanimoto was taken to a hospital, police found canisters of tear gas spray in his pockets.