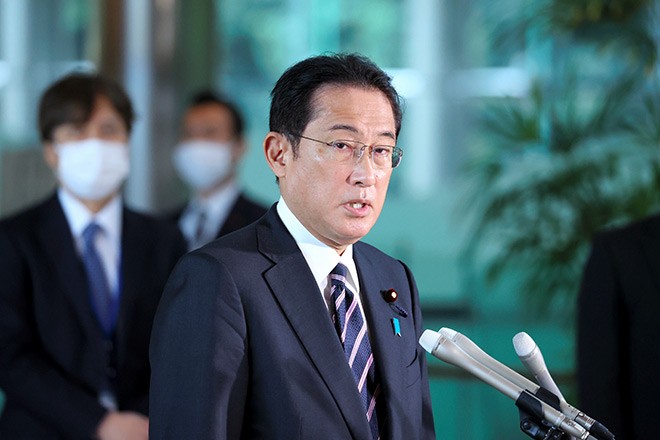 Prime Minister Fumio Kishida meets with reporters outside the prime minister’s office on Dec. 7 after the United States decided to stage a diplomatic boycott of the Beijing Winter Olympics. (Asahi Shimbun file photo)

Forty-three percent of voters believe Japan should not stage a diplomatic boycott of the Beijing Winter Olympics, compared with 35 percent who favored such a move, an Asahi Shimbun survey showed.

According to the nationwide telephone survey conducted on Dec. 18 and 19, opposition to a diplomatic boycott by Japan was highest among respondents aged between 18 and 29, at 54 percent.

The opposition rate was lowest among those in their 60s, at 35 percent.

Forty-two percent of male and 28 percent of female respondents supported a diplomatic boycott, according to the survey.

The United States announced earlier this month that it would not send any government officials or politicians to the Beijing Winter Olympics to protest China’s human rights abuses of the Muslim Uighur minority.

Other countries, including Canada and Britain, have since followed suit.

Japan has not made an official decision on whether it will also stage a diplomatic boycott.

Just under 50 percent of supporters of the ruling Liberal Democratic Party oppose the idea of a diplomatic boycott by Japan, compared with nearly 40 percent of LDP backers who were in favor of it.

The percentages were similar among supporters of the main opposition Constitutional Democratic Party of Japan.

In contrast, more supporters of Nippon Ishin (Japan Innovation Party) favored a diplomatic boycott than those who were against the idea.

Twenty-six percent of respondents who do not support any party said Japan should diplomatically boycott the Olympics, whereas 41 percent believed it should not, the survey showed.