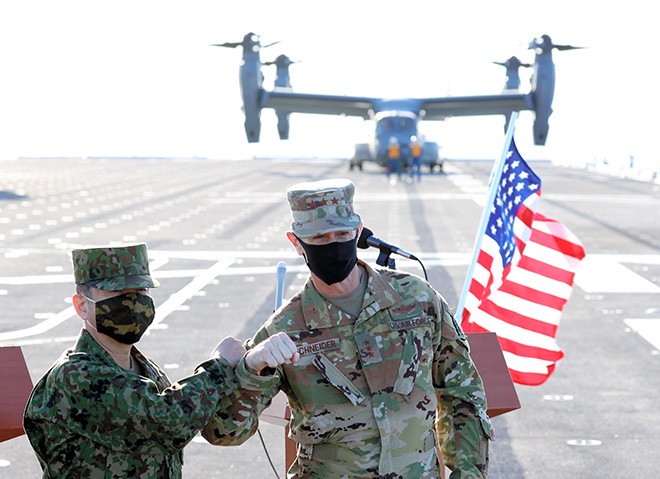 Gen. Koji Yamazaki, left, the chief of staff of the Joint Staff, after an October 2020 news conference aboard the destroyer Kaga. He is pictured with Lt. Gen. Kevin Schneider, commander of U.S. Forces Japan. (Asahi Shimbun file photo)

The government decided to no longer use the term “sympathy budget” when referring to the hundreds of billions of yen it commits each year in host nation support (HNS) for U.S. military personnel stationed in Japan.

Foreign Minister Yoshimasa Hayashi announced the policy change at a Dec. 21 news conference. He said sympathy budget had been in use for too long as a moniker for HNS.

From now, it will be referred to as “the budget to enhance resilience of the alliance,” he said.

The Trump administration had risked alienating allies with its calls for significant increases in such outlays by host nations.

Demonstrating greater resilience in the alliance came in the form of a symbolic new expenditure for procuring equipment and supplies to be used in joint training exercises between the Self-Defense Forces and the U.S. military.

This will involve purchasing simulator equipment that the SDF could use for remote participation in training exercises by U.S. military personnel in the United States.

The new agreement will be formally signed at a Jan. 7 meeting in Washington, D.C., involving Hayashi, Defense Minister Nobuo Kishi and their U.S. counterparts.

However, Japan over the next five years will gradually reduce the amount it pays for utilities expenses clocked up by the U.S. military to further demonstrate that the HNS no longer takes the form of a sympathy budget.

The term sympathy budget came about in large part because the expenditures borne by Japan were intended to provide support to the U.S. military based in Japan.

But under the new policy, the intent is to show that steps are being taken to strengthen the deterrence and resilience of the bilateral alliance.

Kishi made that point at the Dec. 21 news conference when he said, “We have been able to demonstrate our resolve to make the Japan-U.S. alliance even stronger and to stand shoulder-to-shoulder in dealing with the increasingly severe national security environment.”

Government officials privately rejoiced at the relatively small increase in the HNS. When Donald Trump was still U.S. president, he repeatedly called on Japan and other allies to greatly increase their outlays for defense. According to one report, Washington sought a fivefold increase in Japan’s HNS.

A ruling coalition lawmaker said the new expenditure related to joint training was included in exchange for reducing utilities expenses due to a sense that the SDF is being called upon to shoulder a greater share of the security burden. In light of that, the legislator said it would be wrong for Japan to also continue paying more for such costs.

(Naoki Matsuyama contributed to this article.)