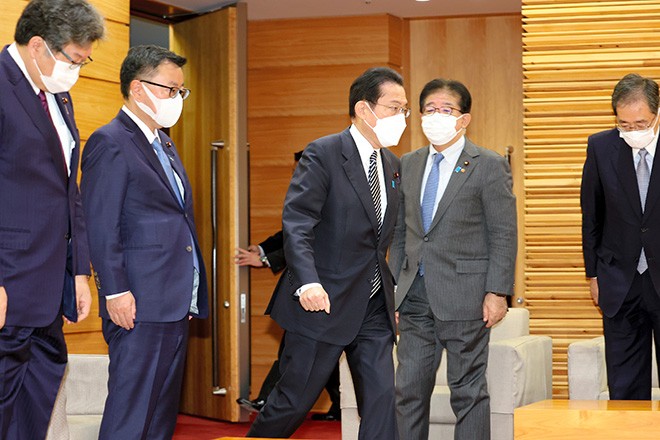 The Cabinet on Dec. 21 approves basic plans for policies concerning children, including the establishment of an agency for children and families in fiscal 2023. (Koichi Ueda)

The government has decided to create a new agency for children and families starting in fiscal 2023 to bring related issues under one entity, but still faces numerous challenges including finding funding for its operation.

The Cabinet on Dec. 21 approved basic plans for policies concerning children, including the establishment of the new agency, which will serve as the command center to carry out those policies from the standpoint of children.

The agency was proposed under the administration of former Prime Minister Yoshihide Suga to cut across traditional jurisdictional boundaries of government ministries and agencies regarding policies for children.

Originally, the new agency was to be called "agency for children," but the name was changed at the last minute to include support for families as well.

The agency will be set up under the Cabinet Office and be under the direct supervision of the prime minister. It will be headed by a minister and can issue advisories to other government ministries and agencies.

The government aims to submit related legislation to the ordinary Diet session next year to establish the agency with more than 200 staff members.

The welfare ministry and the Cabinet Office are currently in charge of policies regarding child welfare, such as child abuse and poverty. The new agency will assume those functions.

But the government had difficulty deciding what to do with the administrative functions concerning policies for child education, which are currently handled by the education ministry.

It decided that the education ministry will continue to oversee kindergartens, while it will discuss the curriculum guidelines with the new agency. The ministry and the agency will also share information on serious cases of bullying to compile countermeasures together.

The government has yet to decide how to secure funding for carrying out the new agency’s policies.