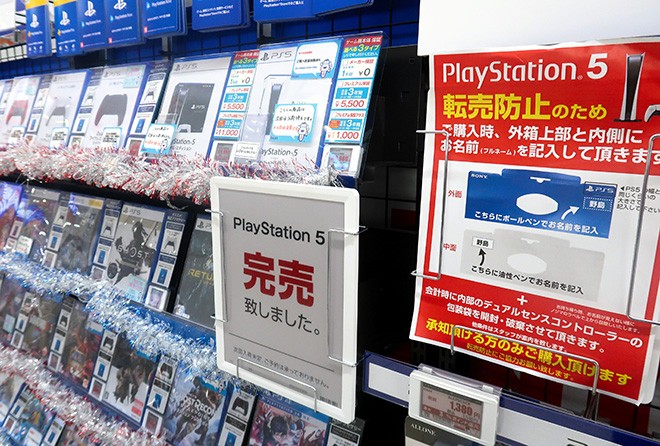 A notice at a home appliance store in Kawasaki on Dec. 20, 2021, says PlayStation 5 has been sold out. (Yasuro Suzuki)

Santa’s sleigh may be lighter this year, much to the disappointment of children and adults who put game consoles at the top of their Christmas wish lists.

The game devices have disappeared from store shelves, and manufacturers face difficulties to increase production because of the global semiconductor shortage pushed by the rapid digitization of products that also require chips.

Stores have resorted to lottery systems for the highly prized items. Online auctions and other resale methods of game consoles have led to a surge in prices, particularly ahead of the Christmas gift-giving season.

Sony Interactive Entertainment Inc.’s PlayStation 5 has been particularly hard to find. Shortages of parts, such as semiconductors, have reduced production to a crawl.

Nintendo Co. has reviewed the design of its Nintendo Switch console and is considering using substitute parts to mitigate the impact of semiconductor shortage.

Game-related products have long been among the most sought-after items of children for the Christmas season. This year, when stay-at-home lifestyles have continued because of the COVID-19 pandemic, is no exception.

According to a survey conducted by toy maker Bandai Co., the No. 1 present that children want this year is “game software,” chosen by 16.3 percent of respondents.

The survey also showed that parents are expected to spend an average of 9,957 yen ($87) on a Christmas present for their child, up 713 yen from the previous year.

That figure is well below the retail price of most game consoles. But it doesn’t matter anyway if the products are unavailable.

Demand has exceeded supply for PlayStation 5 since its release in November 2020. In July this year, its global sales volume exceeded 10 million units.

That was a faster pace than for sales of PlayStation 4, which became available in 2013.

According to Famitsu, a game information magazine, the domestic sales volume of PlayStation 5 was 28,324 in November this year, a sudden drop to one-third of the figure for the previous month.

For the same seven-day period, more than 190,000 Nintendo Switches were sold.

“It appears that PlayStation 5 is highly popular, but because shipments to stores have decreased, retail sales have also fallen,” Famitsu said.

Given the dearth in supply, electric appliance retailers have used a lottery system to sell the few PlayStation 5 consoles they have on hand.

According to Google Trends, Google searches for “PS5 lottery” in Japan have increased from the previous year because people are so eager for a chance to “win” the console.

Some people have been reselling the product on flea market apps, and prices have skyrocketed.

The suggested retail price for the regular version of PlayStation 5 is 54,978 yen, including tax.

Fukuoka prefectural government seized a used PlayStation 5 with attached headphones from a delinquent taxpayer. It fetched 89,999 yen at a public auction in late November.

To prevent scams, Mercari Inc. said it “deletes a post (from its marketplace app) when it confirms that a seller does not have a posted item on hand.”

Since autumn, Nojima Co., a mass retailer of home electric appliance, has asked customers to write their names in ballpoint pen on the PlayStation 5 boxes upon purchase to prevent the products from being resold as “new.”

Store staff also remove the encasement of the controller to deter resales.

“We want to provide more buying opportunities for people who actually want to purchase the game console,” a Nojima representative said.

Production of game consoles is not expected to increase anytime soon.

“The impact of supply constraint on parts, such as semiconductors, has certainly become bigger,” Hiroki Totoki, an executive deputy president of Sony Group Corp., the parent company of Sony Interactive Entertainment, said at a corporate meeting in late October.

Nintendo announced in early November that it reduced its expected sales volume for the Switch in fiscal 2021 to 24 million, down 1.5 million from the initial forecast.

“If game devices continue to be hard to obtain in the long run, usage of cloud games, which do not need gaming hardware, may increase,” he said.