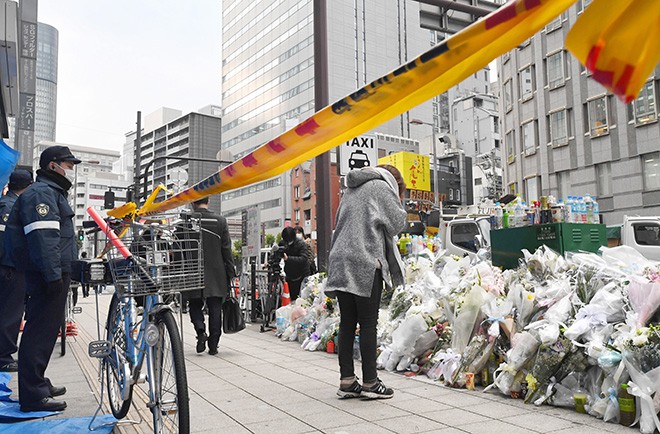 People offer prayers and flowers to the victims of the arson attack in Osaka’s Kita Ward on Dec. 22. (Kenta Sujino)

OSAKA—A man believed to have set a deadly fire at a clinic here blocked people who were desperately fleeing the flames and apparently tampered with firefighting equipment beforehand, investigative sources said.

Morio Tanimoto, 61, the prime suspect in the arson attack that killed 25 people, remains in critical condition at a hospital here.

He may have been injured in the fire because he did not immediately flee from the burning building but instead stayed there to thwart the escape attempts of others, according to the sources.

Osaka prefectural police said security camera footage showed a man believed to be Tanimoto parking a bicycle in front of the multitenant building housing the clinic in Osaka’s Kita Ward on the morning of Dec. 17.

The man, carrying paper bags in both hands, used an elevator to reach the fourth-floor clinic.

A camera inside the clinic captured the man showing an item, possibly a reservation card, at the reception desk. He then put the paper bags on the floor and kicked them.

As fluid spread from the bags, the man squatted down and moved his hands close to the floor, police said. He appeared to be using a cigarette lighter to set the fire.

As the fire flared up, the man moved toward the flames. People inside the clinic ran toward the entrance door, but the man tried to grab as many of them as possible or to get in their way, police said the footage showed.

Police also searched a house in Osaka’s Nishi-Yodogawa Ward where Tanimoto had stayed before the fire and found a tool that he may have used on a fire hydrant or an emergency door at the clinic.

The search also uncovered a handwritten memo with the words “paint a fire hydrant” and “arson murder,” as well as a newspaper article about a deadly arson attack in Kyoto in 2019.

A fire hydrant and the emergency door at the clinic were found difficult to operate, police said.

Tanimoto used to work at a sheet-metal factory.

A lighter was found at the fire scene. Tanimoto was also carrying two canisters of tear gas when he was taken to a hospital, police said.

Given the latest findings and the security camera footage, police said they believe Tanimoto’s actions were premeditated and intended to kill as many people as possible.