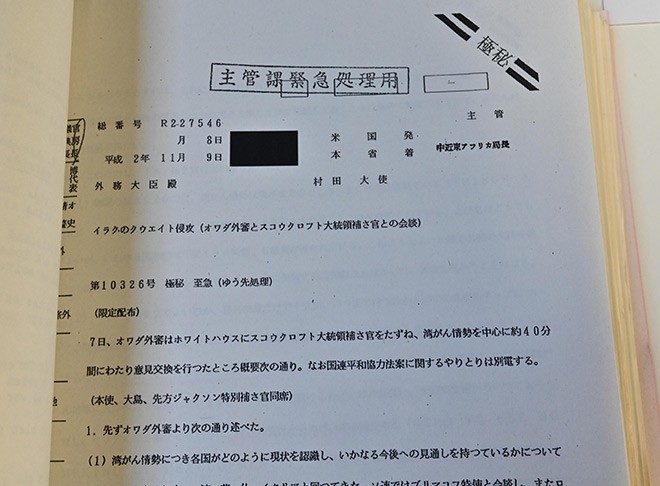 As former Prime Minister Yasuhiro Nakasone headed on a high-profile mission to Iraq in early November 1990 seeking the release of Japanese hostages, a secret diplomatic mission was also starting.

Prime Minister Toshiki Kaifu enlisted Deputy Foreign Minister Hisashi Owada to “have in-depth discussions with other countries" about their views on an international coalition to drive Iraq out of Kuwait.

Then, Owada flew around the world on his mission with his first stop in Moscow.

A series of “top secret” diplomatic documents released on Dec. 22 strikingly shows the diplomacy he engaged in with the Soviet Union and Western nations at a crucial time during the Persian Gulf crisis.

Owada needed to ascertain the future actions of the Soviet Union, which still had great influence in the Middle East even after the end of the Cold War.

Primakov told him based on his two discussions with Iraqi President Saddam Hussein that Iraq’s stance over its withdrawal from Kuwait “has softened to a certain degree.”

“We should not issue an ultimatum that Iraq must withdraw from Kuwait,” he added.

Owada asked him, “On what grounds do you think that Iraq is seriously considering withdrawing?”

He also asked Primakov whether he told Hussein about the possibility that the Soviet Union would use force against Iraq.

But Primakov asked Owada, “Can you respond to whether Japan will send its troops?”

“As Japan can’t send its forces abroad under the Constitution, the answer is 'no,'” Owada said. “I will ask you one more time. Did you inform the Iraqis (of the possibility of the Soviet Union using force against Iraq)?”

Primakov replied, “I said, ‘We would make an attack.’”

After that, Owada flew to London and shared the viewpoints of Primakov with top British government officials.

At that time, Owada learned of British Prime Minister Margaret Thatcher’s belief that it was appropriate to use force against Iraq at an early stage.

On Nov. 2, 1990, Owada met the French vice foreign minister in Paris and was told of French President Francois Mitterrand’s view that, “The time when we have to consider the use of force will soon come.”

On Nov. 4, 1990, Owada had dinner with top U.S. and British government officials, who were attending an international conference in Rome.

Robert Michael Kimmitt, U.S. undersecretary of state, said that if the United States took military action against Iraq, it would be difficult from February to June because of the constraints of the climate, religion and politics.

So, that put the opportune time to initiate action from January.

They discussed the prospect of a U.N. Security Council resolution authorizing force to expel Iraq from Kuwait.

The Soviet Union was the focus of attention because as a permanent council member, it held veto power over such a resolution.

When Owada touched on his communications with Primakov, he said, “(The Soviet Union) is highly likely to give approval.”

The British deputy undersecretary of foreign affairs said that Primakov clearly told the British ambassador to the Soviet Union that his nation would follow the resolution backed by the United States and Britain until the end.

On Nov. 7, 1990, in the United States, Owada’s final destination, he held talks with Deputy Secretary of State Lawrence Sidney Eagleburger in Washington.

Eagleburger, who asked the attendees not to take notes, said that the United States was coming closer to an armed clash and U.S. President George H.W. Bush wouldn't be satisfied with any halfway diplomatic resolution.

When Owada asked Brent Scowcroft, then U.S. national security adviser, about Primakov’s intermediary diplomatic efforts with Iraq, he replied that the United States felt negative about his attempts and that the Soviet Union must take another step forward.

The United States showed skepticism over whether the Soviet Union would actually cooperate on the world stage after the end of the Cold War.

The information Owada gathered on his mission became the foundation of the internal report on major countries’ political stances on the Persian Gulf crisis and circumstances leading up to the start of the Gulf War in January 1991.

This article is part of a series of stories based on diplomatic documents declassified by Japan's Foreign Ministry in December 2021.