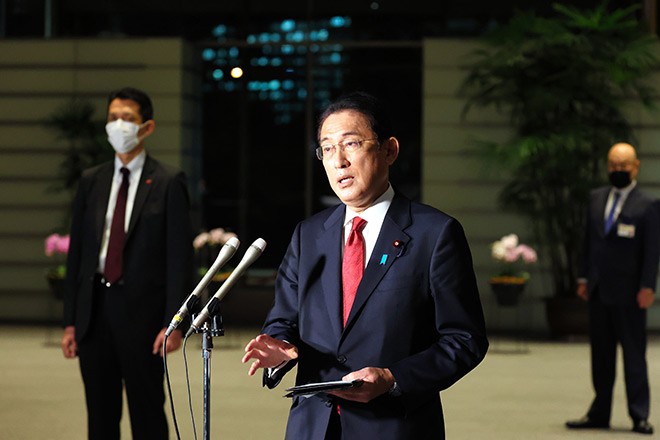 Prime Minister Fumio Kishida speaks with reporters on Dec. 22 after the first community infection of the Omicron variant was confirmed in Osaka. (Koichi Ueda)

Central and local government officials were heightening their anti-infection efforts after Japan’s first community infection of the Omicron variant was confirmed in Osaka and other untraceable COVID-19 cases emerged.

“The central government will take thorough measures in recognition of the community infection that could not be linked to a source,” Prime Minister Fumio Kishida told reporters on Dec. 22.

Measures so far include continued international travel restrictions, curbs on operations at bars and restaurants, and preparations at medical facilities for Omicron patients.

Some health experts say more needs to be done to contain the Omicron variant of the novel coronavirus.

Health ministry officials on Dec. 22 confirmed the fears expressed by Osaka Governor Hirofumi Yoshimura that three members of a family in the prefecture were Japan’s first case of community infection of the Omicron variant.

The three family members are being treated at a hospital along with two other infected children who are awaiting the test results to see if they have the Omicron strain.

Health ministry officials said Dec. 22 they had confirmed 160 Omicron cases in Japan, including those found at airport quarantine stations. So far, none of the patients has developed serious symptoms.

The father who was confirmed infected with Omicron variant is a teacher at an elementary school in Neyagawa, Osaka Prefecture.

Officials of the Neyagawa municipal board of education said all teachers at the same school were tested for COVID-19. One teacher tested positive, and a genome sequencing test is being conducted to determine if it was the Omicron variant.

Polymerase chain reaction (PCR) tests were given to all children who came in close contact with the first teacher. Eventually, all pupils at the school will be tested, the officials said.

As of the evening of Dec. 22, no student was confirmed with COVID-19.

Osaka prefectural government officials also said Dec. 22 that two other local residents who had never been abroad or in close contact with a returning Japanese national were confirmed infected, but not by the Delta variant.

Tests are continuing because of the high possibility the two were also infected with the Omicron variant.

After the Omicron cases of the three family members were confirmed, Osaka prefectural government officials quickly backtracked on their plan to lift restrictions at bars and restaurants, such as limits on party sizes and the time customers can eat and drink there.

Those restrictions will remain in place into the new year, the prefectural officials said.

The community infection case led Takaji Wakita, head of the National Institute of Infectious Diseases who chairs the health ministry’s advisory panel, to say, “The situation is one in which we should assume a rapid spread of infections in the nation.”

Koji Wada, a professor of public health at the Otawara, Tochigi Prefecture-based International University of Health and Welfare, warned that the medical care structure could come under severe strain if health care professionals are infected by the Omicron variant.

“The situation might arise in which we have enough hospital beds but lack hospital staff to care for patients,” Wada said.

He urged the government to ask the public to be more flexible about changing their travel plans for the year-end and New Year period if the number of new infections suddenly increases.

Some prefectural governments were accelerating moves to secure hospital beds for patients with the Omicron variant, even though the current number of cases may not be very high.

Earlier, on Dec. 21, Kishida said entry restrictions on passengers on international flights will remain into the new year.