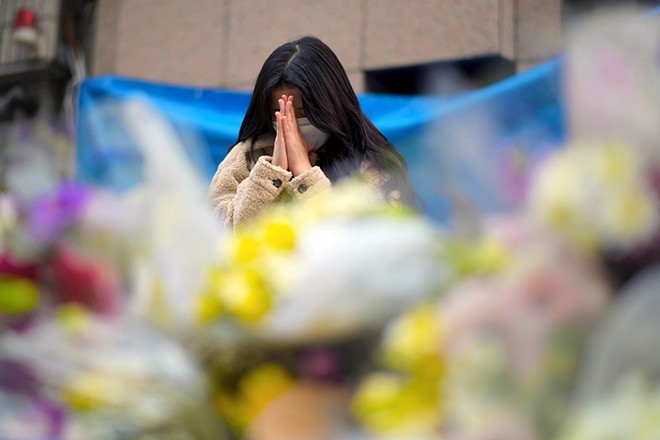 A woman on Dec. 22 offers a prayer in front of the arson attack site in Osaka’s Kita Ward. (Tatsuo Kanai)

OSAKA—Police revealed more details about how a suspected arsonist trapped people inside a burning clinic here, including setting fire to the only emergency exit at the site.

The Dec. 17 fire at the mental health clinic was doused in about 30 minutes, but it killed 25 people who could not leave the building. They all died of carbon monoxide poisoning, Osaka prefectural police said.

An elevator and the nearby emergency exit stairs are the only routes out of the clinic, the sole tenant on the fourth floor of the building in Osaka’s Kita Ward.

Based on security camera footage at the clinic, police said the suspect, believed to be Morio Tanimoto, 61, emerged from the elevator at clinic at 10:15 a.m. on Dec. 17, carrying a paper bag in each hand.

The man placed the paper bags on the floor out of the line of vision of staff at the reception counter.

He took off his shoes and dropped something in a box at the reception counter, apparently to pretend he was there to see a physician, police said.

The man returned to the area in front of the elevator, took out a lighter from his pocket, and lit it several times.

He slowly tilted one of the paper bags with his left hand to allow fluid, confirmed to be gasoline, to spill onto the floor, police said.

The gas was set on fire and flames quickly reached the ceiling.

Two people near the emergency exit ran down the stairs and escaped. The door to the stairway had been left open apparently to allow better air circulation as an anti-COVID-19 measure.

About 10 patients who were in the waiting room and staff working at the reception counter ran toward an examination room and a meeting room at the back of the clinic. There is no emergency exit there.

The suspect picked up the other bag and threw it toward the emergency exit, which caught fire and blocked the evacuation route, police said.

As the fire raged, the suspect proceeded toward the back of the clinic. One person tried to run back to the elevator, but the suspect threw himself in front of that person, police said.

The fire grew, and the security camera recording was interrupted.

Firefighters had the blaze under control by around 10:45 a.m.

Twenty-six people found unconscious in rooms in the back area of the clinic were taken to hospitals. The door leading to these rooms had been shut.

Tanimoto was found collapsed on the elevator-side of that door and was also hospitalized in critical condition.

The gap in the door for an indoor fire hydrant was caulked with an agent to prevent it from opening, police said.

Investigators found a wallet containing Tanimoto’s driver’s license and a patient registration card for the clinic at the emergency stairway.

Police also said a knife was found at the scene, and a sheath that would fit the blade was discovered at Tanimoto’s house in Osaka.

Investigators said they suspect Tanimoto had studied the layout of the clinic, rehearsed the attack and planned to kill as many people as possible.