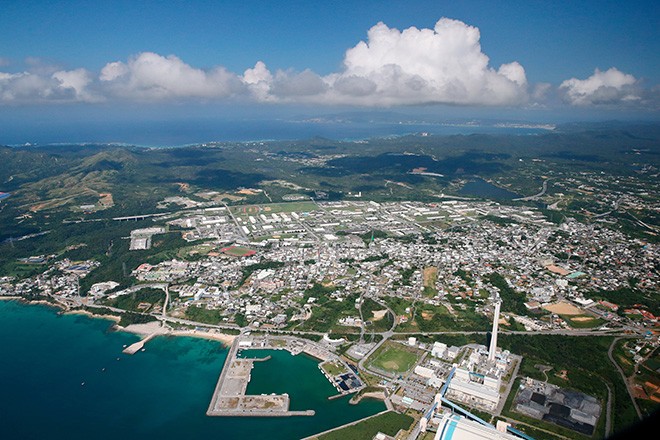 A recent cluster infection in Okinawa Prefecture among members and employees of U.S. military bases is casting a spotlight on the limitations of Japan’s strict border control measures.

And local political figures are expressing concerns the latest variant could easily spread further throughout their communities because base personnel frequently interface with the local populations.

The prefectural government said on Dec. 22 that 223 people have tested positive for the coronavirus over an eight-day period at the U.S. Marine Corps’ Camp Hansen in Kin.

As of Dec. 22, at least five Omicron cases had been confirmed among people related to Camp Hansen.

That includes two Japanese employees at the base, a U.S. national who is a civilian employee living outside the base and that person’s husband.

Another Omicron case was also confirmed on Dec. 22. That person is an employee at Camp Schwab, another U.S. Marine Corps base located in Nago city and Ginoza village in the prefecture.

It is unknown if the cluster infection was caused by the Omicron variant.

But prefectural officials believe the Omicron variant was first brought into the prefecture by U.S. military personnel and others transferred from the U.S. mainland under the planned deployment of military units. It would then have spread among local people who work at the bases.

Prime Minister Fumio Kishida recently announced that Japan will continue to employ “the strictest border control measures” in its bid to protect the country against the Omicron variant.

The current measures, which ban foreigners from entering Japan, were initially only expected to last until the end of the year.

Amid concerns over the fast-spreading new variant, the measures will remain in place for the time being, Kishida said.

But many U.S. military personnel and civilian employees are exempt from the restrictions.

Under the Japan-U.S. Status of Forces Agreement, Japanese laws regarding passports and visas do not apply to them.

That allows people to enter a base in Japan directly from the United States and are not subject to quarantine at airports.

Yoshiaki Katsuda, a professor of travel medicine at the Kansai University of Social Welfare, said the bases reveal a major flaw in the government’s policy aimed at insulating the country.

“It is certain that the U.S. bases are loopholes in (the government’s) border controls (against COVID-19),” he said. “In principle, the U.S. military’s infection measures are thorough, backed by a strong organization: The Centers for Disease Control and Prevention. But that may not be always enough to control general soldiers’ awareness and behaviors.”

The U.S. military was said to have implemented its own strict anti-virus measures, such as requiring two weeks of self-isolation before departure and after arrival.

However, those measures were eased before the current cluster occurred.

According to the Okinawa regional headquarters of the All Japan Garrison Forces Labor Union, an organization of Japanese employees working at U.S. bases, military personnel and others are free to move around bases immediately after entry to Japan if they have been vaccinated twice.

A mask-wearing mandate was also lifted in late November, the union said.

Existing U.S. military personnel and Japanese workers go in and out of the bases on a regular basis.

It is now clear these people have been in contact with U.S. military personnel and others who recently entered the country but did not go through Japan’s rigid quarantine process.

The regional headquarters is urging the Japanese government and the U.S. military to review the lifting of the mask mandate because “it is premature.”

“While Japan was unaware, anti-virus measures in the bases were eased. And that has invited the current situation,” said Eizo Yonaha, the chair of the headquarters. “The pandemic doesn’t discriminate regardless of country, region or race. So, it is nonsense to set up a wall--namely, the Japan-U.S. Status of Forces Agreement--there, which exempts quarantine. The Japanese government cannot even check what kind of measures are being taken inside the bases and what kind of people have entered the bases and when.”

It has also become clear that testing to check if the virus is the Omicron variant cannot be conducted inside the bases.

U.S. military officials maintain that, if necessary, that kind of testing will be done in the United States.

The prefectural government on Dec. 17 offered to conduct genomic analysis to determine whether the strain in question is the Omicron variant, but the U.S. military declined, citing the protection of personal information.

Kishida has said that “all people infected with the virus domestically will be tested (to determine) if it is the Omicron variant.”

But that national guideline falls flat when it comes to the situation in Okinawa with the U.S. military.

Chief Cabinet Secretary Hirokazu Matsuno said at a news conference on Dec. 22 that the U.S. military told the Japanese government that it would “conduct variant testing with cooperation from the Japanese side and will share the results with Japanese officials.”

But in the late evening of Dec. 20, a member of the U.S. military belonging to Camp Hansen was arrested for driving under the influence on Route 58, about 30 kilometers south of the base.

The person was later released.

Many U.S. military personnel and civilian contractors live outside of the bases.

The U.S. military has urged personnel through social media to wear masks since the beginning of the pandemic.

But Katsuhiro Yoshida, a former mayor of Kin who lives near Camp Hansen, said he saw a person related to the military walking outside the base without wearing a mask on Dec. 21.

The next day, he saw a person connected to the military working without a mask inside the base.

He noted that children of civilian employees of the U.S. military attend local elementary and junior high schools.

“Measures have remained ambiguous,” he said. “I am worried because Christmas is approaching when many young soldiers will go out.”

Okinawa Governor Denny Tamaki said at a news conference on Dec. 21 that he regards the recent cluster “as a very serious threat.”

“It is impermissible that the Omicron variant that the U.S. side has brought in has spread among employees at the bases. But in actuality, it has been happening,” he said. “Now, what kind of tough measures will the military try to implement?”

Katsuda said if military personnel go to a restaurant outside the base but do not report it honestly because they are afraid of punishment, an infection could spread while the authorities remain unaware of possible points of contact.

“I want people who go in and out of the bases and those who work at bars and restaurants around the bases to be widely tested, and I want (the governments) to accelerate the booster-shot schedule for residents of nursing homes and others who are at a higher risk,” he said.

(This article was written by Tsukasa Kimura and Tomooki Yasuda.)