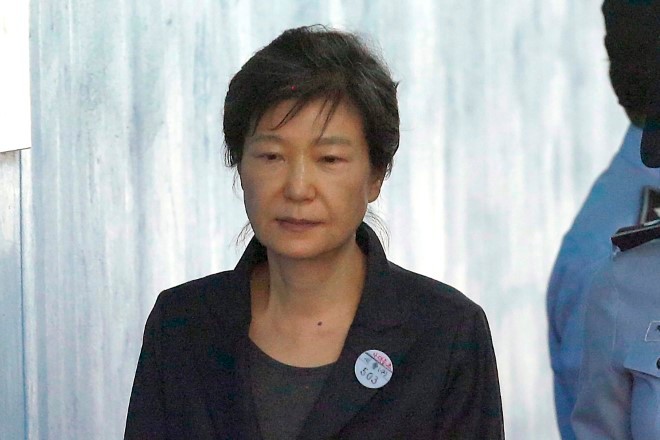 Former South Korean President Park Geun-hye arrives to attend a hearing on the extension of her detention at the Seoul Central District Court in Seoul on Oct. 10, 2017. (AP Photo)

SEOUL--South Korea said Friday it will grant a special pardon to former President Park Geun-hye, who is serving a lengthy prison term for bribery and other crimes.

The Justice Ministry said in a statement that Park’s pardon is aimed at overcoming national divisions and promoting unity in the face of difficulties caused by the coronavirus pandemic.

Park was arrested and sent to prison in 2017, after being removed from office following a corruption scandal that prompted months of massive street protests. Her ouster marked a stunning fall from grace for the country’s first female president and conservative icon.

In January, South Korea’s Supreme Court upheld her 20-year prison term. She could have served a combined 22 years behind bars because she was separately convicted of meddling in her party’s nominations ahead of parliamentary elections in 2016.

Park is a daughter of late authoritarian President Park Chung-hee. She was elected in late 2012 on a wave of support from conservatives who celebrate her father as a hero who pulled the country up from poverty despite his suppression of civil rights.

She was impeached by lawmakers in December 2016, and formally removed in March 2017, after the Constitutional Court upheld the impeachment.

Among the main charges she faced was collusion with her longtime confidante, Choi Soon-sil, to take millions of dollars in bribes and extortion money from some of the country’s largest business groups, including Samsung, while she was in office.

She was succeeded by Moon Jae-in, a liberal who won a special by-election following her ouster.