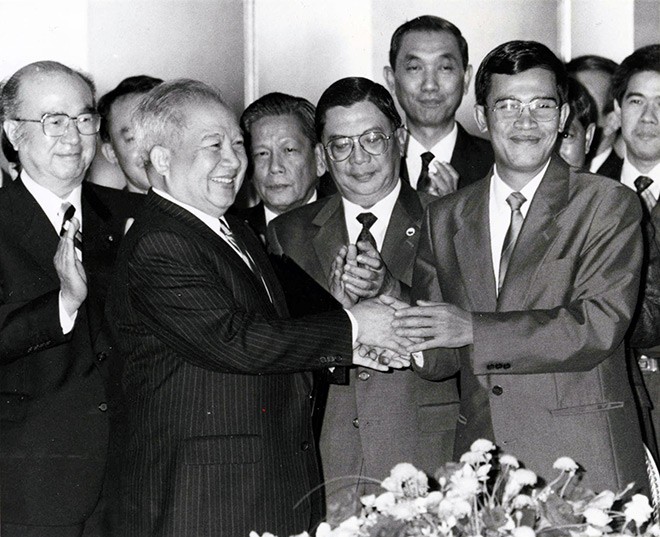 For the first time after the end of World War II, Japan took the spotlight on the international stage as a mediator by hosting talks for a third country in 1990.

Diplomatic documents released on Dec. 22 reveal the intense and determined efforts of Japanese diplomats behind the scenes to arrange a Cambodia peace conference in Tokyo.

The hosting helped Japan change its image as seen by other nations as an economic power that only contributed financially to benefit the world.

According to the documents, on April 19, 1990, Masaharu Kono, director of the first Southeast Asia division of the Foreign Ministry, sent an official telegram to Tadashi Ikeda, then minister in the Japanese Embassy in Thailand, who was also in charge of Cambodia.

In the telegram, Kono talked about his passion for hosting the peace talks in Tokyo to Ikeda.

“It could be the first peace conference held in Japan in our history,” Kono said.

Former colonial power France was making efforts to bring about peace in Cambodia, where a civil war had raged since the 1970s, but was facing a difficult situation.

Kono’s telegram was filled with tension and exaltations as Japanese diplomacy was heading into unknown territory following the end of the Cold War in the previous year.

“The prospect of a conference is totally unpredictable as of now, but I am seeking for one to produce concrete achievements that will be positive steps toward peace,” Kono said.

Prior to the telegram, a Japan and Thailand summit was held at the prime minister’s office in Tokyo on April 7, 1990.

Kono told Ikeda that he had initiated the proposal.

“Both countries’ same intentions were described in a meeting with the Thai prime minister advisory group the previous night before the summit. The conclusion was withdrawn from the communications at the summit,” he said.

Kono and Ikeda became preoccupied with their efforts to bring the Cambodian prime minister and Sihanouk together in Japan.

But on May 7, 1990, Sihanouk suddenly announced in Beijing, “I won’t get involved with politics or war anymore, so I can’t visit Japan.”

On May 8, 1990, the Japanese foreign minister sent a telegram to the Japanese Embassy in China, saying that, “the Japanese government has already been preparing for Sihanouk’s visit to Japan with the utmost care, such as arranging a meeting with the emperor and talks with Kaifu.”

On May 22, 1990, Sihanouk met Ikeda in Cambodia, and said, “I am truly impressed by the Japanese government’s friendship toward me, such as the recent visit to Beijing and this visit. In return, I will hold talks with Hun Sen and sign the document if we reach an agreement.”

The released diplomatic documents suggested that from the beginning, the peace conference in Tokyo aimed to achieve an agreement promoting peace in Cambodia, apart from the Khmer Rouge.

The Cambodia peace conference in Tokyo was held on June 4 and 5, 1990.

A Khmer Rouge representative visited Japan, but did not attend the conference.

Sihanouk and Hun Sen made a concrete agreement for peace and the establishment of a new administration.

On June 6, 1990, Hun Sen spoke to Kono about his respect for Sihanouk, his political rival.

“Under Sihanouk’s governance, I was just an elementary school student and I still retain the feeling of that time. I respect him from the bottom of my heart,” Hun Sen said. “I truly hope that he will play an important role after peace is achieved.”

Sihanouk would later become chairman of the Supreme National Council, which was formed in the peace negotiation process for national reconciliation.

Hun Sen has continued serving as the Cambodian prime minister to this day.

After the peace conference, Kono talked about its significance to diplomats of Southeast Asia nations.

“As Japan, which has close relationships with five countries on the U.N. Security Council and other Asian nations, we put the most important focus on the continuation of the momentum for peace,” he said.

Japan continued to stay involved in Cambodia and dispatched its Self-Defense Forces for the first time to the U.N. peacekeeping operation that supported the first general election held after the peace agreement was reached.