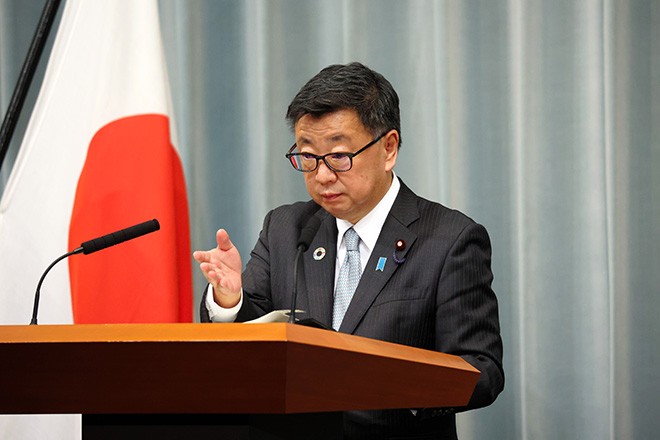 Japan will not send Cabinet members or high-level officials to the Beijing Winter Olympics, joining a diplomatic boycott that will likely strain ties between the two Asian neighbors.

“We think it is important that freedom, respect for basic human rights and rule of law are guaranteed in China, too,” Matsuno said. “We have reasoned holistically regarding our response to the Beijing Games.”

However, Matsuno said that Yasuhiro Yamashita, chief of the Japanese Olympic Committee, as well as Seiko Hashimoto, president of the organizing committee of the Tokyo Olympics and Paralympics, will attend the Winter Games in China that will start in February.

They were already scheduled to join the General Assembly meeting of the International Olympic Committee in Beijing around the same time.

The United States on Dec. 6 announced its diplomatic boycott of the Beijing Games over reports of China’s forced labor of ethnic minorities and its repression of the Uighur minority in the Xinjiang Uighur Autonomous Region.

But France, which will host the Summer Games in Paris in 2024, and South Korea said they would not join the diplomatic boycott.

The Japanese government was stuck between its desire to emphasize its stance espousing human rights and its concerns over worsening relations with its largest trade partner, China.

“For now, I want to carefully and comprehensively consider various circumstances to make a decision.” Kishida said at a news conference on Dec. 21.

Pressure on Kishida came from within.

Lawmakers of both ruling and opposition parties urged the government not to send representatives to the Beijing Winter Games.

A group of Diet members on Dec. 14 asked Kishida at the prime minister’s office to join the diplomatic boycott.

The ruling Liberal Democratic Party’s Foreign Affairs Division and Research Commission on Foreign Affairs on Dec. 23 submitted a resolution to Foreign Minister Yoshimasa Hayashi, urging the government to immediately decide on and announce a diplomatic boycott.