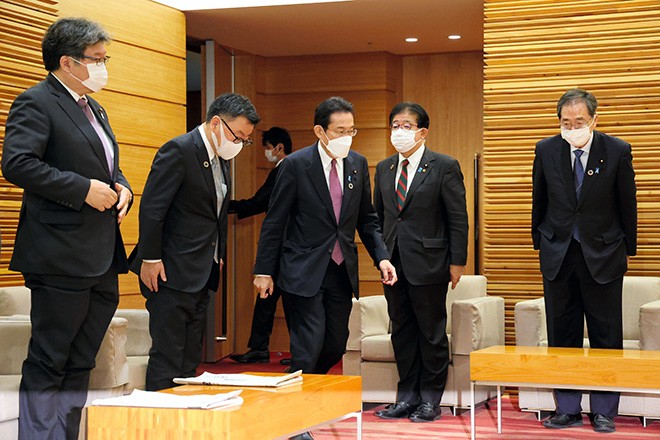 The total spending package is 0.9 percent larger than the initial fiscal 2021 budget, exceeds 100 trillion yen for the fourth consecutive year, and represents about 20 percent of Japan’s gross domestic product.

The issuance of government bonds has been reduced, but they will still account for one-third of all central government revenues.

A record-high 36.273 trillion yen, or one-third of the budget, will go to social security programs, an increase of 1.2 percent over the previous fiscal year.

The increase to deal with the graying population and other issues had been forecast at 660 billion yen as of the end of August, but medical care expenses were reduced by 0.94 percent, limiting the increase to 440 billion yen.

However, new expenditures were included in the budget, including 17.4 billion yen to allow women under 43 to use the national health insurance program for fertility treatment, including artificial insemination.

Measures to raise the salaries of workers in nursing, elderly care and day care services by 3 percent, as promised by Kishida, were included in the budget.

Salary increases until September 2022 will be covered by the supplementary budget of the current fiscal year, while about 60 billion yen was included in the fiscal 2022 budget to cover the pay hikes for the six months from October.

Nurses working at medical institutions treating COVID-19 patients will have their monthly salaries increased by 1 percent until September and by 3 percent from October, according to Kishida’s plan.

Five trillion yen has been set aside to deal with the novel coronavirus pandemic, a figure similar to the one in the current fiscal year budget.

To deal with the expected spread of the Omicron variant, 640 million yen has been earmarked to bolster local public health offices, while 21.7 billion yen has been budgeted for stronger measures connected to the entry of passengers from abroad.

Defense spending will be increased by 1 percent to a record 5.368 trillion yen, the 10th straight year the defense budget has been expanded.

Research and development costs, including those for the next-generation fighter jet to replace the F-2, will rise by 37.6 percent to 291.1 billion yen.

As for revenues, the forecast for tax revenues has been set at 65.235 trillion yen, which is 7.787 trillion yen more than the initial fiscal 2021 revenue forecast.

If the forecast is met, it would represent a record for tax revenues.

The budget also calls for the issuance of 36.926 trillion yen in government bonds, a decrease of 6.671 trillion yen from the fiscal 2021 budget.

The estimated outstanding balance of government bonds at the end of fiscal 2022 has been set at 1.026 quadrillion yen.

(This article was written by Ken Sakakibara and Tomoyuki Izawa.)