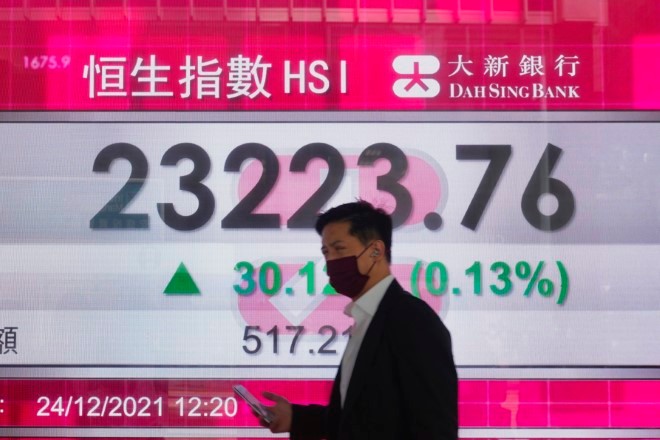 A man walks past a bank's electronic board showing the Hong Kong share index at Hong Kong Stock Exchange on Dec. 24. (AP Photo)

Investor anxiety has mounted as Omicron spread but moderated after authorities said it might cause less severe illness. President Joe Biden called for more vaccinations and testing but announced no plans for travel restrictions.

Omicron looks like a “short-term disruption” instead of a “destructive headwind that knocks the economy off its course,” Edward Moya of Oanda said in a report. “The U.S. economic recovery in 2022 still looks very strong.”

New Zealand and Jakarta advanced while Bangkok retreated. Singapore was closed for Christmas.

The surge in Omicron cases has weighed on Wall Street as investors tried to gauge the impact on 2022 corporate profits. Governments in Asia and Europe have tightened travel controls or pushed back plans to relax curbs already in place.

The Commerce Department reported Thursday that U.S. consumer spending rose 5.7 percent in November over a year earlier, its fastest pace in 39 years.

Inflation also is running at a four-decade high, which prompted the Federal Reserve to indicate it will accelerate the withdrawal of economic stimulus that has been boosting stock prices.

The Labor Department said the number of Americans applying for unemployment benefits was unchanged last week, reflecting a strong rebound for the job market.

In energy markets, Brent crude lost 54 cents to $76.10 per barrel in London. U.S. markets were closed for Christmas.