Floatable electric vehicle tested for possible use in disasters

An electric automobile that can float is tested at Osaka University’s Suita Campus in Osaka Prefecture. (Video by Kengo Kamo) 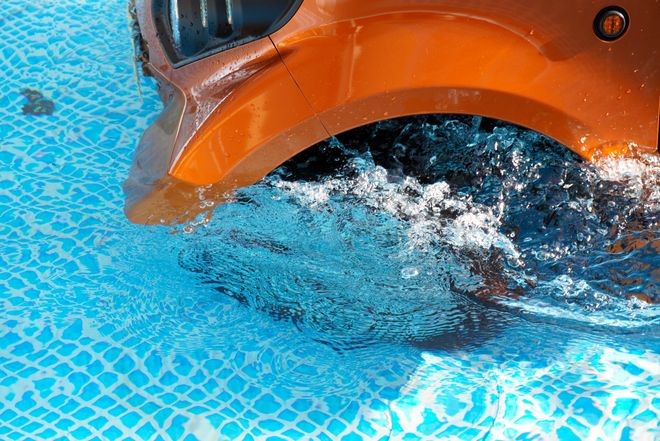 The wheel of a floatable electric car, shown on Dec. 20 in Suita, Osaka Prefecture, boasts a propeller-like design that can move the vehicle forward and backward by stirring water. (Kengo Kamo)

SUITA, Osaka Prefecture--A special electric vehicle that floats on water and can take people to safety during floods and other disasters underwent a test run at Osaka University’s Suita Campus.

The 2.6-meter-long EV, developed by FOMM Corp., was parked in a pool 5 meters in diameter on Dec. 20. When water was supplied and reached a depth of 1 meter, the vehicle’s body gradually rose, and it did not sink even when a driver got aboard.

The driver could steer the EV forward and make it turn on the water. The accelerator is operated by hand to prevent accidental pressing of the gas pedal instead of the brake.

One problem is that the EV can only travel at 1 to 2 kph on water, making it difficult to move against strong currents.

According to FOMM, the vehicle’s waterproof drive system can prevent it from breaking down on inundated roads.

“We designed the car so that it would not easily be thrown out of action in flooded underpasses and elsewhere in emergencies,” said a representative of FOMM, which produces compact EVs and offers related services in Kawasaki, Kanagawa Prefecture.

FOMM’s EV is made of resin, and its wheels have a propeller-like structure allowing the vehicle to move on the water surface.

The trial run was part of Osaka University’s graduate school program that conducts verification tests of self-driving and other features of electric cars.

The maximum driving range of the four-passenger car is 160 kilometers. The EV carries a price tag of 2.7 million yen ($23,600), including tax.

The electric model has been produced in Thailand since 2019.

FOMM sold around 20 units in Japan in 2021, the first year it was available in the county. The company plans to eventually raise annual production to 10,000 units.