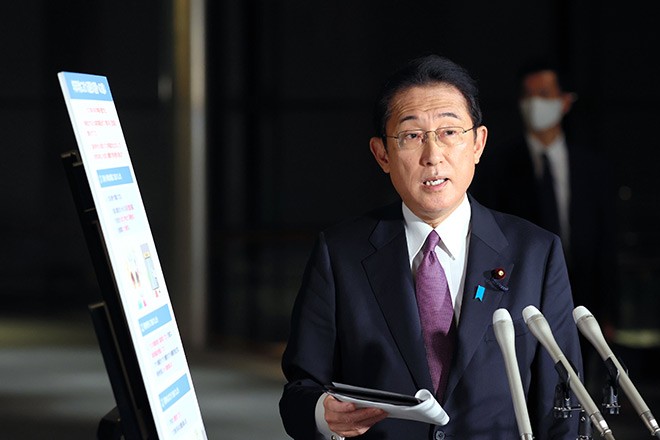 Prime Minister Fumio Kishida speaks with reporters Dec. 24 about steps to deal with the Omicron variant of the novel coronavirus during the year-end and New Year period. (Koichi Ueda)

Prime Minister Fumio Kishida signaled his intention to attend the Nuclear Nonproliferation Treaty review conference early next year, which would be a first for a Japanese leader.

As a Lower House member representing a district in Hiroshima Prefecture, Kishida has made no secret of his hopes of a world without nuclear weapons, a dream harbored by those who survived the Aug. 6, 1945, atomic bombing of the city in western Japan.

Kishida hopes to be in New York from Jan. 4 when the NPT review conference is scheduled to start, according to several government sources.

However, the rapid spread of the Omicron variant of the novel coronavirus both in the United States and Japan could scuttle those plans.

As of now, Kishida hopes to be in the United States between Jan. 4 and 6.

Demonstrating his interest in nuclear disarmament, Kishida took part Dec. 9 in an online international conference on the issue, becoming the first Japanese prime minister to do so.

He said he would make every effort into working toward signing an agreement that could serve as a basis for progress toward the elimination of nuclear weapons.

Japan signed the NPT in 1970, but despite its experience of atomic bombing, has balked at signing the Treaty on the Prohibition of Nuclear Weapons because it relies on the U.S. nuclear umbrella for its defense purposes.