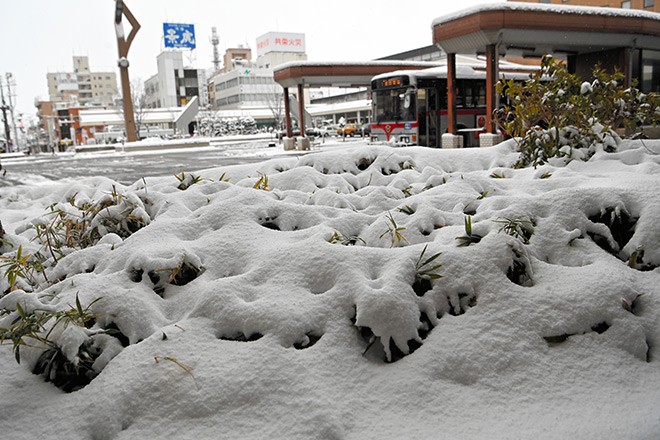 Flower beds in front of JR Nagaoka Station lied buried in snow in Nagaoka, Niigata Prefecture, on the morning of Dec. 26. (Yosuke Fukudome)

Heavy snow was forecast over northern and western parts of the country facing the Sea of Japan on Dec. 26 and warnings were issued urging residents to be vigilant against snow storms, surging waves and the deep chill.

The bad weather is expected to continue until Dec. 28, according to the Japan Meteorological Agency, citing a winter pressure pattern with a severe cold air mass spreading above the archipelago.

The agency also warned that low-lying areas on the Pacific side of Japan could experience heavy snow.

Over the 24-hour period through 2 p.m. on Dec. 26, Myoko in Niigata Prefecture recorded the largest single-day snowfall of 82 centimeters, followed by 72 cm in Daisen, Tottori Prefecture, and 69 cm in Minakami, Gunma Prefecture.

East Nippon Expressway Co. was expected to close off the Horinouchi Interchange and Yamato Smart Interchange of the Kanetsu Expressway in Niigata Prefecture from 3 p.m. the same day.