Police: Arson suspect was patient at clinic for 2 to 3 years 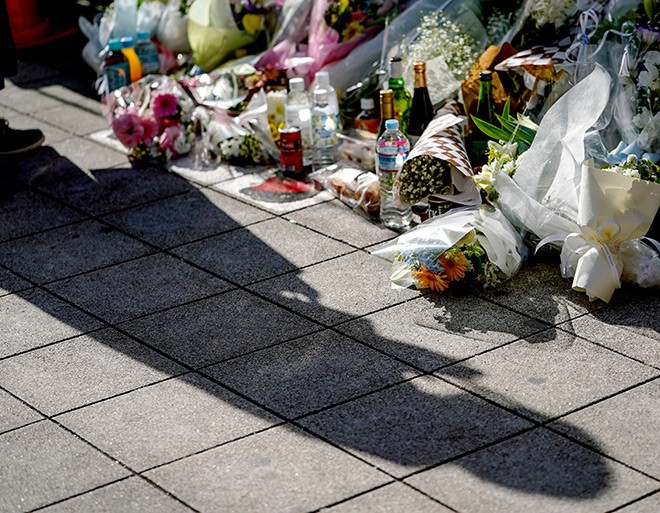 Flowers and prayers are offered on Dec. 19 in front of the building that was set on fire in Osaka’s Kita Ward. (Ryo Kato)

OSAKA—An arson suspect was a patient for two to three years at the clinic that was set on fire, investigative sources said, adding that he may not regain consciousness because of severe brain damage caused by the attack.

Morio Tanimoto, 61, suffered burns to limited parts of his body, but he remains in critical condition from carbon monoxide poisoning and cerebral hypoxia due to a lack of oxygen to the brain, the sources said.

The sources said Tanimoto may never recover enough to answer questions about the fire set at the mental health clinic in a multitenant building in Osaka’s Kita Ward on Dec. 17 that killed 25 people.

But Osaka prefectural police are still collecting evidence to build their case against him.

Investigators have said the arson attack was premediated and designed to kill as many people as possible.

Tanimoto may have studied the structure of the clinic during his regular visits as a patient there, the sources said, citing statements from people associated with the clinic.

His patient identification card for the clinic was found inside the building after the fire.

A bag of drugs prescribed by the clinic was seized from Tanimoto’s house in the city’s Nishi-Yodogawa Ward, about 3.5 kilometers west from the clinic.

He had been living there for about a month before the arson attack.

Security camera footage at the clinic shows a man believed to be Tanimoto setting fire near the elevator and in the emergency exit stairway in an apparent attempt to trap people inside, police sources said.

The gap in the door for an indoor fire hydrant was caulked with an agent to prevent it from opening, police said.

Twenty-six people were found unconscious in rooms in the rear part of the clinic. Tanimoto had collapsed on the elevator side of the closed door leading to the rear. He is believed to have been the first one taken out of the building.