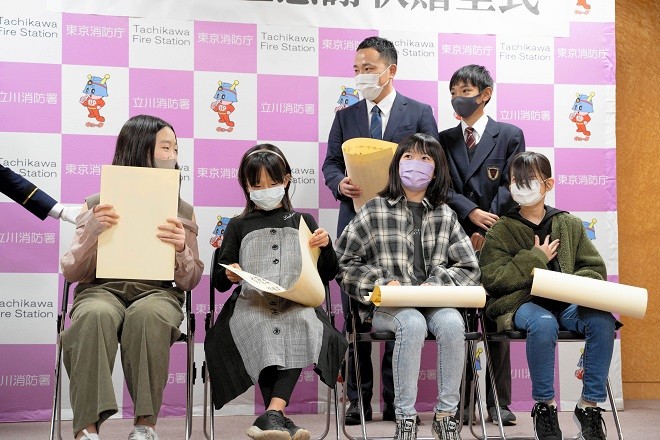 Yasuhiro Tsuda, left in the back row, his children and their friends pose for photos after receiving a letter of appreciation during a ceremony held at the Tachikawa fire station in the western Tokyo city of Tachikawa on Dec. 22. (Hikaru Yokoyama)

Tsumugi Sato was playing hide-and-seek with three of her friends in a park in the Sunagawacho district of Tachikawa in western Tokyo late in the afternoon on Nov. 29.

As the 10-year-old ran around looking for a place to hide, she noticed smoke pouring out of the second floor of a nearby house.

She alerted Misaki Tsuda, 10, who was the seeker, about the fire and the four children hurried to Misaki's house in the neighborhood.

Misaki's father, Yasuhiro, 40, was enjoying his day off while watching TV in his pajamas when his eldest daughter shouted, "Dad, there's a fire!"

Yasuhiro wasted no time. He quickly put on his shoes and ran to the house on fire some 50 meters from his place.

His eldest son, Shotaro, 13, also followed his father while he called 119 on his smartphone to report the fire.

When Yasuhiro arrived at the scene, he opened the door without ringing the doorbell. It was unlocked.

Yasuhiro works as a firefighter with the Kawasaki city fire department in Kanagawa Prefecture.

Because the smoke was white and there was no visible fire, he concluded he could go inside.

When he went up to the second floor, he found a woman in her 70s who lived there crouched on the floor, crying. She clung to Yasuhiro’s shoulder and they walked out of the house together.

The fire burned an area of 12 square meters on the second floor of the two-story wooden house, which has a total floor space of about 97 square meters.

The fire was contained about two hours from when it started.

The woman was rushed to a hospital where she received treatment for smoke inhalation for more than three weeks.

"Her life could have been in danger had she been rescued a bit later," said an official at the Tachikawa fire station.

On Dec. 22, the fire station handed a letter of appreciation to Yasuhiro and the five children for their collective effort to report the fire, save the injured woman and help put out the fire at an early stage.

"Though even adults lose their cool in many cases, the children acted calmly. I felt that they made use of what they learned from their disaster-prevention education," Yasuhiro said.

Hirofumi Shimizu, chief of the Tokyo Fire Department, who handed them the letter of appreciation, said, "Their wonderful coordination kept damage to a minimum."