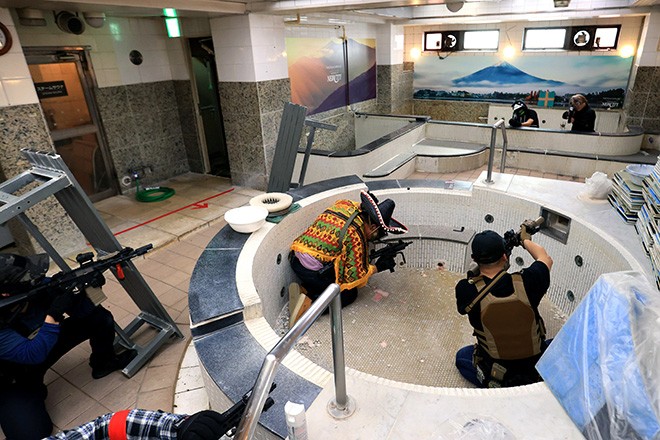 Airsoft players battle in the common bathroom at a closed hotel in Yokohama’s Naka Ward on Nov. 28. (Kazuhiro Nagashima)

YOKOHAMA--A hotel that was shut down during the novel coronavirus crisis has become a battleground.

Around 30 airsoft events have been held there since the hotel closed in March, drawing around 1,000 competitors for the matches.

One recent weekend, two 10-member teams engaged in a “gun battle” at the large common bathroom.

Some participants hid behind bookshelves lined with comics and waited for a chance to eliminate their enemies.

“We can fight in real-life settings,” said Toru Hosonuma, 29, a regular competitor. “We get pumped up when we mimic the charging scenes seen in action films.”

A five-hour event costs 5,000 yen ($43) to 7,000 yen per player. Rental weapons are available, and many beginner players have joined the action.

The building, which started operations as a hotel in 2002, has also been used for filming of a TV drama and YouTube videos.

Its operator is now seeking other ways to use the existing facilities. Using the kitchen for a food delivery service is being considered.