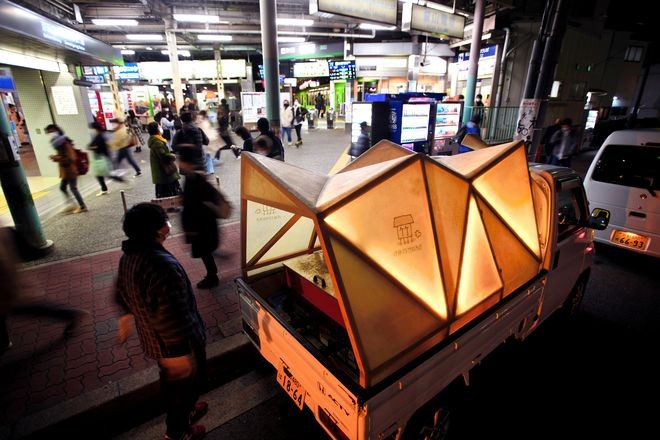 When it roams through the Saiin district of Ukyo Ward lined with small factories and apartment buildings, Chie Miyake, 49, often comes running out of an office building.

A regular customer, Miyake said she looks forward to savoring a freshly-baked sweet potato and having a conversation with Takemura.

Takemura was born in Otsu, Shiga Prefecture, where his parents operate a barber shop. He studied at Kyoto Sangyo University here.

When he was living in a shared house, he learned that his roommate’s grandfather had planned to close his long-running yaki-imo business.

Takemura decided to become his apprentice.

He learned the basics, including how to roast sweet potatoes and drive through the city, before taking over the profession.

Although Takemura’s business currently faces difficulties amid the novel coronavirus pandemic, which has suspended street fairs, he immediately fell in love with the food vending service.

For one thing, he could fulfill his desire of running a small business, like his parents, in close contact with locals. For another, his service is popular among customers regardless of age and gender.

Takemura also loves how the song over the speaker lures customers to his truck.

But he also wanted his yaki-imo truck to have an “impact” while keeping the traditional form.

He asked an acquaintance to remodel the truck bed, taking inspiration from dimly-lit paper lanterns. Air resistance, storage space and other functions had to be taken into consideration for the redesign.

The vehicle ended up having a stylish look with the use of wood and fiber-reinforced plastic (FRP), which is commonly used for automobiles and other products, he said.

Takemura makes his rounds mainly in Sakyo, Ukyo and Fushimi wards and the city of Uji in the prefecture from October to April.

The proprietor also uses Twitter and other social media to promote his business and increase his regular customers. He posts when and where he will be operating each day, and updates his current location and next destination.

He also accepts delivery orders when he is in the vicinity.

“I find it rewarding when I see students sharing one yaki-imo with each other on their way home, for example,” Takemura said.

The street vender said he wants to operate more vehicles and encourage exchanges among local communities through yaki-imo.