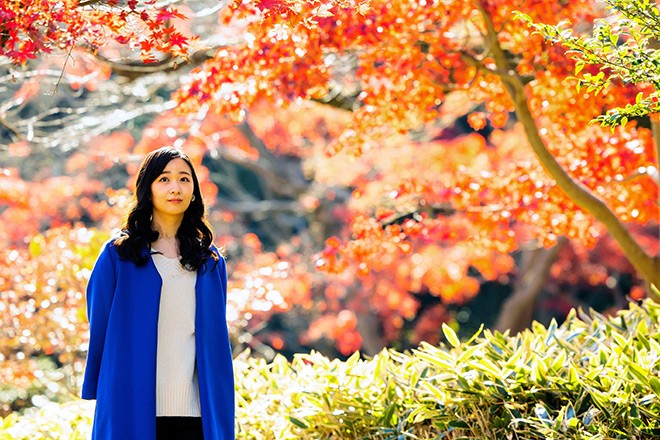 Princess Kako walks in the garden of the Akasaka Estate on Dec. 3. (Provided by the Imperial Household Agency)

Princess Kako, the second daughter of Crown Prince Fumihito and Crown Princess Kiko, turned 27 on Dec. 29 amid a busier schedule following the recent marriage of her sister.

Although the COVID-19 pandemic prevented Kako from visiting places in Japan again this year, the princess has undertaken various public duties online, according to the Imperial Household Agency.

These include activities she took over from her older sister, Mako, who left the imperial family in October upon her marriage to commoner Kei Komuro.

Kako’s aide says that she is happy that Mako could get married as she desired, and that she very much wishes her sister happiness in her new life.

Following Mako’s marriage, Kako took over her position as the honorary president of the Japan Tennis Association.

In November, Kako also assumed the role of attending “Midori no Wa Koryu no Tsudoi,” an awards ceremony that recognizes organizations contributing to creating greener cities, a duty that Mako performed until her marriage.

When Kako attended the online ceremony, she was wearing the same green suit that Mako wore the last time she appeared at the event.

In May, Kako joined the Japanese Federation of the Deaf as a fixed-term employee.

She works for the organization three times a week, mainly online. Her public duties have also included attending many events for deaf people and their supporters, such as a national sign language competition for high school students.