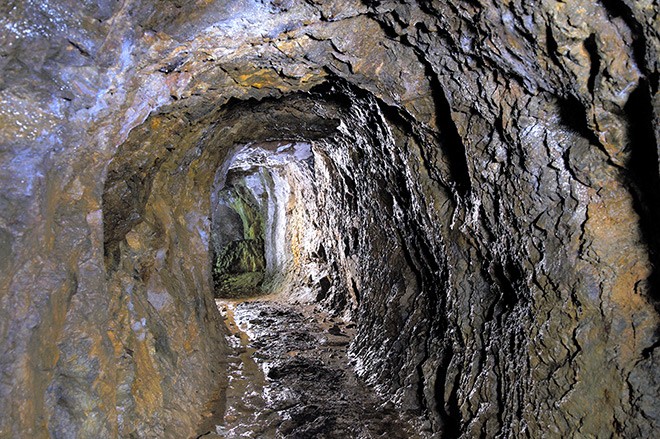 A tunnel at the Tsurushi Silver Mine in Sado, Niigata Prefecture (Provided by Sado municipal government)

South Korea reacted sharply to moves by Japan for ancient gold and silver mines on the island of Sado in Niigata Prefecture to be included in UNESCO’s 2023 World Heritage List.

Seoul called for an immediate retraction of the listing on grounds the complex is strongly associated with the use of forced Korean labor by Japan during its 1910-1945 colonization of the Korean Peninsula.

The recommendation, put forward Dec. 28 by the Council for Cultural Affairs, constitutes Japan’s sole candidate for inclusion on the list in 2023.

The site consists of the Nishimikawa Placer Gold Mine, the Aikawa Gold and Silver Mine and the Tsurushi Silver Mine. Mining operations there reached their peak during the early Edo Period (1603-1867) and stopped in 1989.

An official at the Cultural Affairs Agency explained at a Dec. 28 news conference that Sado in the 17th century was the world’s top producer of gold.

The official noted that the site offered a rare example of how traditional manual mining technology improved even as mechanized machinery began being introduced in other mines around the world in the leadup to the 19th century.

After the council decision was announced, the South Korean Foreign Affairs Ministry immediately issued a statement calling for a retraction.

The statement also referred to continuing resentment with regard to a site already included in the World Heritage list.

This concerns the “Sites of the Meiji Industrial Revolution,” which was designated as a UNESCO World Heritage site in 2015, and includes the Hashima Coal Mine on a tiny speck of rock known as “Battleship Island” off the coast of Nagasaki city.

In July, the UNESCO World Heritage Committee passed a unanimous resolution that expressed misgivings over the  Japanese government’s pledge to disclose more information about the use of forced Korean labor at Hashima during World War II.

The South Korean Foreign Affairs Ministry blasted the Japanese government for not living up to its promise to explain how the workers were brought to Hashima and the harsh conditions under which they worked.

The statement said the South Korean government would vigorously oppose any inclusion of any site for which sufficient explanation is lacking in a historical context.

Government sources acknowledged that a number of hurdles existed before formal approval of the Sado gold mine candidacy could be given. A primary concern was that gaining approval would add another diplomatic problem to bilateral ties already at their lowest levels since World War II.

But not approving the site could have political ramifications locally. This is because the Niigata gubernatorial election is scheduled for next May and the Upper House election must be held next summer. In both cases, candidates from the ruling coalition and opposition are expected to face off.

Sado Mayor Ryugo Watanabe welcomed the council’s decision, but Ko Nakano, who heads a group that has long sought inclusion of the Sado gold mine complex as a World Heritage site, fretted whether the government would green light the council’s recommendation.

(This article was written by Momoko Jingu in Tokyo and Takuya Suzuki in Seoul.)