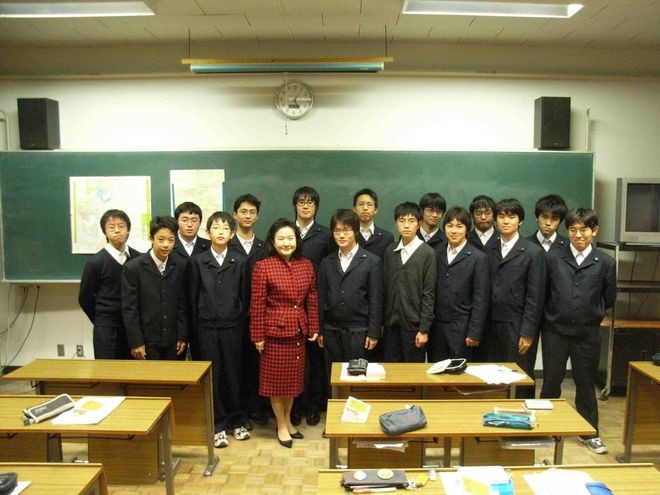 Yoko Kato, fourth from left in the front row, and students at Eiko Gakuen Junior and Senior High School in Kamakura, Kanagawa Prefecture, in 2008 (Provided by Asahi Press Inc.)

More than a decade has passed since history professor Yoko Kato gave special lessons at a combined junior-senior high school, but her former students still fondly remember them and are applying what they had learned.

They say their instructor gave them a masterclass in how not to repeat the mistakes of Japan’s violent past when they took the unique classes 14 years ago on what made the country wage the Pacific War.

It was a grueling, yet rewarding, educational marathon on the importance of critical thinking and speaking out when it matters most, they said.

“They were so intense,” Shinpei Ishizuka, 30, said of the classes he attended when he was a second-year senior high school student at Eiko Gakuen Junior and Senior High School. “By the time I left for home tired from the classes, the sun had already set.”

He and 16 other students at the private school in Kamakura, Kanagawa Prefecture, learned the logic behind the wars waged in modern Japanese history during the classes, held on five days between December 2007 and March 2008 and taught by Kato, a professor at the University of Tokyo.

The classes were turned into a book titled “Soredemo Nihonjin wa ‘Senso’ wo Eranda” (And, Still, Japan Decided to Go to War) by the publisher that organized the classes.

She encouraged the students to think about why people back then ended up believing they had no choice but to start the Pacific War.

“Such a historical approach (to war) was new to me,” said Ishizuka, who became interested in the Arab world and went on to enter the Tokyo University of Foreign Studies.

He currently works at a major general contractor.

A total of 430,000 copies of Kato’s book, including the paperback edition, have been published so far. The students said they treasure their copies and have kept them in their bookshelves ever since.

Kato’s name made headlines in 2020, when then Prime Minister Yoshihide Suga refused to appoint six recommended scholars who had criticized the security policies of his predecessor to the Science Council of Japan. Kato was one of those not appointed.

Suga only said his decision was based on “a comprehensive perspective while looking at the big picture.”

“The authorities move things forward without clarifying the purpose or who is behind the decisions,” said Koki Miyasato, 30, who was a first-year senior high school student when he took Kato’s classes. “That’s probably what Japan was like before the war.”

Miyasato studied at the University of Tokyo after graduating from senior high school and, after drifting from job to job for some time, now works at an industrial waste processing firm.

He knows too well how hard it is to go against the tide.

“I could have been the one who trumpeted the belief that ‘kamikaze’ (divine wind) would blow during the war,” he said.

In the classes, Kato repeatedly urged her students to imagine how they would have behaved back then because not only politicians but also the public shape history and, at the time, people were not necessarily reluctant to choose the path to war.

Kato would quote diary entries written on and immediately after Dec. 8, 1941, when Japan staged the surprise attack on Pearl Harbor.

Yoshimi Takeuchi (1910-1977), a scholar of Chinese literature, described his feelings at the time as “invigorating,” while the novelist Sei Ito (1905-1969) wrote, “Everyone looked delighted and was upbeat.”

Miyasato said, “People can’t survive if they say, ‘We are going to lose this war.’ It’s easier to believe we will win.”

A key factor behind Japan’s decision to wage the Pacific War was whether it could secure enough petroleum and other resources necessary for war.

The Imperial Japanese Army’s General Staff Office compiled a report in autumn 1941 on the speed of building new transport ships and aircraft being damaged. It concluded that the country could gather strength while continuing to fight the war.

At the time, no one could stop this sense of optimism from prevailing across the nation.

“I remember learning during the classes that the war broke out not simply because the military ran off the rails but because people who thought they were making rational decisions ended up choosing to go to war,” said Soshi Ozaki, 31, another former student who attended Kato’s classes.

Ozaki said he thinks waging war was the “last thing” Japan should have done.

Seemingly rational decisions can lead to tragedy, the students learned, which can make it sometimes hard to avoid repeating the mistakes of the past.

“I think we should respect various opinions since we could (also) misjudge what’s right,” Ishizuka said. “That means embracing opinions different from yours.”

In an interview with The Asahi Shimbun, Kato said some people tell her that studying the outbreak of the Pacific War is meaningless because Japan’s current political system, its Constitution and cozy relationship with the United States all differ from where they stood at the time.

But she said she believes one can apply theories behind how countries become hostile to each other to the current situation if they dig deep into history.

“I told the students during the classes that history doesn’t simply repeat itself,” said Kato. “Another war will look totally different when it looms. You will miss the signs so long as you’re thinking that this is not the (same) path we took in the past.”

She said she presented the key points leading up to the Pacific War to the classes and left it to the students to think about what to watch out for to sense the threat of war.

Kato said she also asked the students during the classes to imagine themselves living at that time. Kato said she made the request to the students because she wants them to be able to look at their present situation through a critical lens.

She quoted a sentence from a postwar essay written by film director Mansaku Itami (1900-1946): “The people who don’t care about being deceived will be repeatedly deceived.”