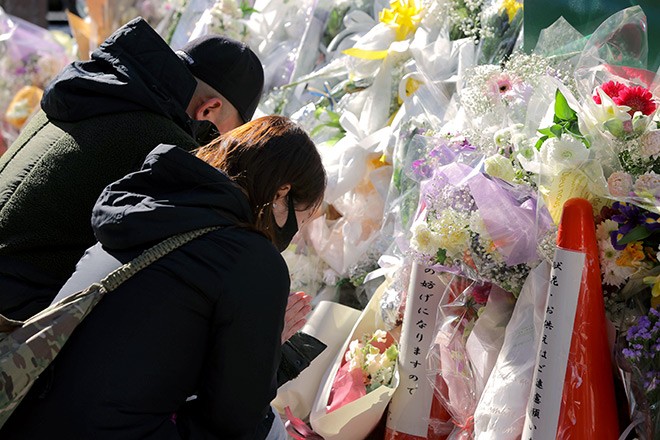 People offer prayers on Dec. 31 in front of the Osaka building where 25 people were killed in an arson attack on Dec. 17. (Jin Nishioka)

OSAKA—The death of the suspected arsonist in the Dec. 17 clinic fire here has left police with unanswered questions and bereaved family members with a sense of dread that they may never receive closure.

Morio Tanimoto, 61, died at a hospital, Osaka prefectural police said on Dec. 30. He never regained consciousness from acute carbon monoxide poisoning caused by the fire he is believed to have set at the mental health clinic in Osaka’s Kita Ward.

Twenty-five others were killed in the fourth-floor fire. Another woman who was at the clinic remains unconscious in critical condition.

“There are no words to express the feelings of the bereaved families toward the suspect now that he has died without apologizing or serving a prison sentence after taking so many lives,” Masahiro Okumura, a lawyer who represents family members of the victims, told reporters.

Police plan to conduct an autopsy on Dec. 31 to confirm the cause of Tanimoto’s death and continue their investigation so that papers can be sent to prosecutors on the dead suspect.

But one high-ranking police officer said: “We can only speculate on what his motive was as well as the overall picture of the crime. (His death) is also regrettable from the standpoint of thinking of ways to prevent a recurrence of such a crime.”

Although police were unable to question Tanimoto, they said evidence collected so far shows the arson attack was premeditated and intended to kill as many people as possible.

Security camera footage showed a man believed to be Tanimoto not only setting fire to gasoline spread on the floor of the fourth-floor clinic but also starting fires at the only two emergency exits.

He was also shown deliberately blocking those trying to flee the burning office in the multitenant building.

As for a possible motive, some officers pointed to Tanimoto’s past conviction for a violent crime.

In April 2011, Osaka police arrested Tanimoto on suspicion of attempted murder of his oldest son by stabbing him with a knife.

Tanimoto was found guilty by the Osaka District Court and given a four-year prison sentence.

The finalized ruling said Tanimoto “considered suicide out of a sense of loneliness” but could not go through with it because he feared death.

The ruling added, “He might have felt he could die if he killed someone first.”

Osaka police said Tanimoto may have had similar feelings in the attack on the clinic because security footage shows the arsonist moving in the direction of the fire instead of trying to escape.

“Like the incident 10 years ago, he may have tried to pull off a murder-suicide by involving other people before taking his own life,” a senior police officer said.

The clinic fire had many similarities to the arson attack in July 2019 at a Kyoto Animation Co. studio that killed 36 people.

Shinji Aoba, the suspect in that case, was taken to a hospital in serious condition with burns over much of his body.

Although papers may be sent to prosecutors in Tanimoto’s case, there will likely be no indictment because court proceedings cannot be held.

Ueda said: “Society should not feel that this incident has ‘ended’ because the suspect died. Both Aoba and Tanimoto should not be considered as special people. There is a need to conduct an assessment to prevent a recurrence.”