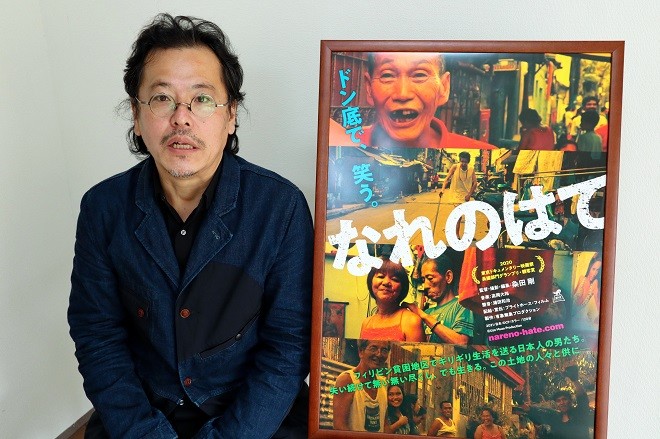 Tsuyoshi Kumeta first visited the Philippines in September 2012 to see if he could create a TV program about Japanese men who follow Filipino women to their homeland after working in Japan’s nightlife industry.

Although the TV show plan was dropped, Kumeta, a freelance video director, continued going to the Philippines at his own expense on 20 occasions over seven years, and he got to know more than 50 Japanese men living in poverty in slums in Manila.

Some of them, including a retired police officer paralyzed on one side from a stroke, as well as a former yakuza member who lives under the eaves of a bike shop while working as a restroom cleaner, are featured in Kumeta’s documentary titled “Narenohate” (The Underdogs).

The film won the grand prize in the long picture division at the Tokyo Documentary Film Festival 2020.

The real-life characters describe themselves in self-mocking tones for bringing misfortune upon themselves.

Kumeta, 52, said he repeatedly asked himself, “what do I really want to shoot” and “what kind of film should I make,” when he recorded more than 200 hours of footage in the Manila slums.

Kumeta became interested in creating visual products when he was in junior high school. He went to see “Sailor Suit and Machine Gun” because Hiroko Yakushimaru starred in the film, but he found himself strongly attracted to the imaging techniques of director Shinji Somai.

His parents bought him a camera for 8-millimeter films when he was in high school, and he joined a filmmaking club in college.

After graduating, Kumeta started working as an independent video creator for tourism promotion campaigns as well as pornographic titles.

He has also been an assistant director, and now mainly develops TV programs and public relations footage for companies.

As a freelancer, Kumeta at times could only grit his teeth and follow the requests of broadcasters, companies and other clients to create image products that did not match his personal taste.

“I would like to dance in my own style at least once instead of performing to fulfill clients’ demands like a ‘filmmaking geisha,’” Kumeta recalled thinking.

The words of a Japanese man in the slums in the Philippines also provided encouragement for Kumeta.

“I want many people to learn that such a man exists here,” Kumeta quoted the man as saying. “I want you to help achieve that.”

The man died before the completion of “Narenohate.”

Kumeta felt uneasy whenever he returned from the chaotic living conditions in Manila and saw the neat townscapes in Japan.

The men he met in the Philippines had failed to find places in such tidy environments, and anyone could face the same difficulty at any time, the filmmaker said.

Kumeta spent about a year re-examining his footage before he began to feel that “a movie can be made” by assembling the images.

He said he tried not to put in too much effort to make the film entertaining.

Asked what message he wants to convey through the film, Kumeta replied he has “nothing” to tell.

“I want watchers to see firsthand how the men live and how they die,” he said. “What is living like? What is happiness like? My hope is that each viewer can find something via the work.”

“Narenohate” is being screened at K’s Cinema in Tokyo’s Shinjuku Ward until Jan. 14. It is also showing at the Kobe Art Village Center complex in Kobe until Jan. 14 and is expected to be screened at the Dai Nana Geijutsu Gekijo theater in Osaka starting on Jan. 22.