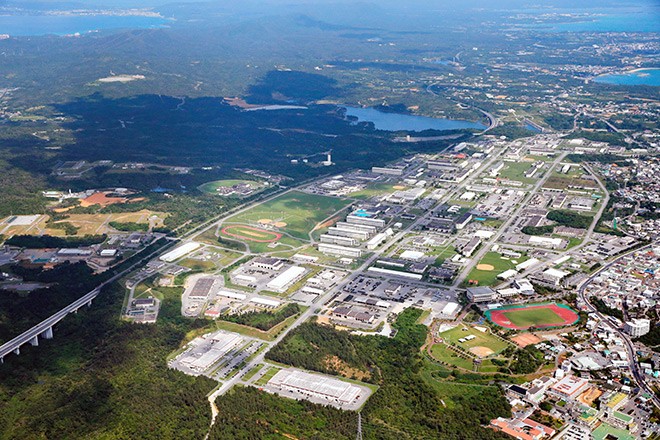 NAHA--Prefectural authorities here announced a single-day record of 235 new COVID-19 cases among U.S. forces in Okinawa Prefecture on Jan. 1, adding that U.S. military officials were still trying to grasp how the explosive outbreak had taken hold.

The issue was complicated by the fact that U.S. authorities refused to share anything other than basic facts. As a result, it was not immediately known to which U.S. base or bases the infected individuals were deployed and whether they had the highly contagious Omicron variant.

The number of infections among U.S. service personnel, as well as civilian base employees, has been surging in the prefecture since last month following an outbreak reported Dec. 17 at the U.S. Marine Corps Camp Hansen that involved 70 individuals.

U.S. authorities reported 45 new cases on Dec. 30 and 98 on Dec. 31, bringing the monthly total of novel coronavirus cases among military personnel to 522 in December alone.

According to prefectural officials, U.S. officials have not determined the trigger for the surge in infections at its bases in the southernmost prefecture and are still investigating.

In light of recent developments, Okinawa Governor Denny Tamaki called Dec. 21 for U.S. military personnel to be confined to their bases to prevent the spread of infections to the prefecture’s civilian population. He made the request to the U.S. military as well as the Japanese government.

In reply, U.S. authorities said they were making progress in containing the outbreak but made no mention of the request to restrict troop movements.

Prefectural officials said they will again urge the U.S. military to ensure that all personnel stay at home following a flurry of reports from local residents that some are still going out and not even bothering to wear face masks.

The record number of new cases among U.S. military personnel in the prefecture followed a Japanese government announcement Dec. 31 that U.S. forces in Japan had moved to test all military personnel and related individuals for the novel coronavirus within 24 hours after their entry to Japan, starting from Dec. 30.

More rigorous testing followed the previous policy of testing only on the fifth day or later following their arrival in Japan and exempting personnel from testing prior to their departure to Japan.

The slipshod approach taken at all U.S. bases in Japan surfaced after the outbreak occurred at Camp Hansen.

On Dec. 22, Foreign Minister Yoshimasa Hayashi conveyed his annoyance about the outbreak in Okinawa Prefecture to Ricky Rupp, the commander of U.S. forces in Japan, and urged him to improve the situation.

Four days later, the U.S. military moved to require personnel to get tested 72 hours prior to their departure to Japan.

Based on the Japan-U.S. Status of Forces Agreement, U.S. military personnel are not subject to Japanese law, which means they fall outside steps taken by Japan to make its borders safe from the novel coronavirus.

Separately from the U.S. military, Okinawa Prefecture logged 52 new cases of the novel coronavirus on Jan. 1.

Of this figure, the Omicron variant accounted for 24 cases, a single-day record for the prefecture. That pushed the accumulated total of Omicron cases to 65 in the prefecture.

The prefecture has been reporting the highest number of new cases per 100,000 people in the nation.