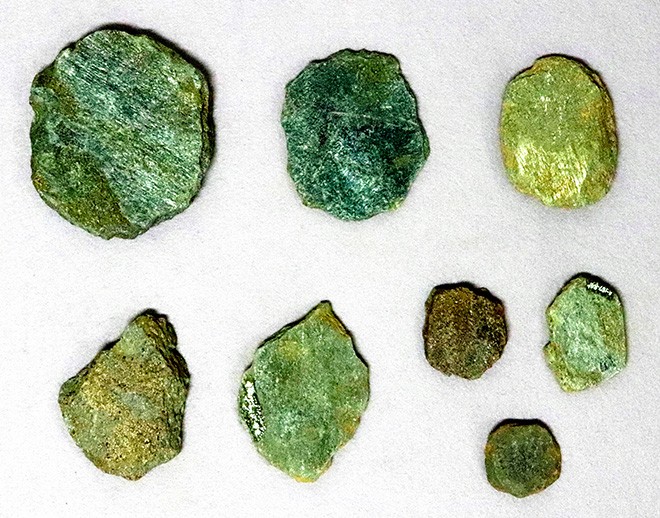 Flat throwing stones with sharpened corners unearthed at the ruins of the Owada “jinya” administrative headquarters in Saitama. They are kept by the Saitama city board of education. (Provided by the Saitama Prefectural Ranzan Historical Museum)

RANZAN, Saitama Prefecture--Artifacts labeled as “groundbreaking discoveries” from the ruins of structures associated with warlord Toyotomi Hideyoshi’s Siege of Odawara in 1590 could have been prototypes of ninja weapons.

Akihiro Iwata, an archaeologist and curator at the Saitama Prefectural Ranzan Historical Museum here, said the flat stones and clay balls may well have been the forerunners of “shuriken” throwing stars and “makibishi” caltrops that later made up ninja arsenals.

Iwata came to this conclusion after re-examining items from the late Warring States period (late 15th to late 16th centuries) excavated at archaeological sites in Saitama and the western Tokyo city of Hachioji.

Flat throwing stones with sharpened corners apparently to inflict damage on enemy forces were unearthed at the ruins of Iwatsuki Castle and the Owada jin’ya administrative headquarters, both in Saitama, between the 1990s and 2000s.

The Siege of Odawara forced the rival Hojo clan to hole up in Iwatsuki Castle before it fell. The Owada jinya, located about 6.5 kilometers away, may have been its branch castle.

Four unglazed clay balls were among items excavated at the ruins of Hachioji Castle around 1960.

Each ball, measuring approximately 1 to 3 cm in diameter, has four spike-like projections so that one of them points upward, apparently to slow the advance of enemy forces.

Hachioji Castle also fell during the Siege of Odawara.

“It is possible that the Hojo clan made these getaway weapons after realizing it faced Hideyoshi’s overwhelming force,” Iwata said.

He added that the forms of these primitive tools suggest that they may have been the prototypes of shuriken and other weapons used by the feudal-era undercover agents.

Yuji Yamada, a ninja expert and professor at Mie University’s Faculty of Humanities, described the artifacts as “groundbreaking discoveries.”

“Flat throwing stones could have developed into shuriken in later years,” he said. “I had never seen clay caltrops before.”