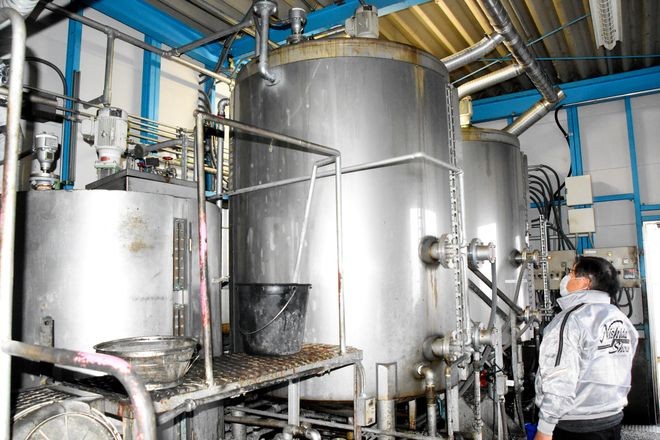 Equipment to produce biodiesel is shown on the grounds of the trucking firm Nishida Shoun on Dec. 8 in Shingu, Fukuoka Prefecture. (Hayato Jinno)

SHINGU, Fukuoka Prefecture--While ramen has its legion of devotees across the world, Masumi Nishida has more of a craving for the "tonkotsu" soup than the noodles.

The head of the Nishida Shoun trucking company here poured his passion into fashioning biofuel from the leftover ramen soup.

Nishida took advantage of the unconsumed opaque broth cooked with pork bones to produce a green fuel based on the local specialty of Fukuoka. The liquid energy source already been put into practical use to power trucks that transport goods.

Situated in Shingu in the suburbs of Fukuoka city, Nishida Shoun has 250 employees and delivers foodstuffs to convenience stores and elsewhere in the Kyushu and Chugoku regions in western Japan.

The site of the company’s headquarters is lined with multiple 2-meter-tall tanks full of used oil collected by staff members from 2,000 restaurants and hotels in Fukuoka Prefecture.

Referring to the containers, Nishida, 74, the company’s chairman, flashed a grin and looked back on his 20-year “struggle” to generate biodiesel, stating, “This facility looks like a factory, doesn’t it?”

Biodiesel is refined by mixing oil used for tempura and other purposes with chemicals. Unlike fossil fuel, biodiesel does not lead to a higher carbon dioxide level in the air when it is burnt, so that type of fuel is deemed as an effective means for decarbonization.

Another advantage of biodiesel is that exhaust fumes from biodiesel-fueled trucks barely contain sulfur oxides, which cause acid rain.

In 2007, Nishida Shoun set up tanks to recycle waste oil as an energy source on a full-scale basis. The move was inspired several years earlier by then Prime Minister Junichiro Koizumi having likened biofuel made from such materials as sugar cane in Okinawa to a “green oil field."

Thinking the eco-friendly project would help his company to preserve the environment while slashing diesel fuel costs, Nishida started with heating used oil for refining in a disposable aluminum container over a portable gas stove. That was because his enterprise was not outfitted with any specialized equipment or laboratory.

Business operators he was friendly with described Nishida as an “oil fanatic," when he spent three and a half years researching and establishing the reuse of waste oil on a commercial basis.

Nishida started considering utilizing tonkotsu soup as well around 2013, after a ramen restaurant chain operator that was a client of his corporation asked him whether “tonkotsu broth left by customers can be recycled though it is now disposed of as industrial residue.”

He quickly started studying provided soup samples. Nishida hit upon the idea of producing biodiesel from lard extracted from ramen broth, so that the completed biodiesel can be combined with recycled fuel made from other kinds of waste oil.

A challenge was how to remove easy-to-solidify substances typically found in lard. Although Nishida developed the technique of melting unnecessary components with hot water for eliminating them, the proper water temperature for the method was difficult to determine.

Plagued by the problem, Nishida had his "eureka" moment when he visited a “shabu-shabu” hot pot meal restaurant by chance. He was casually looking into the pot and discovered that bubbles of oil on the soup suddenly disappear when the temperature reached a certain level.

Nishida thought, “This is it,” and brought a thermometer with him to the restaurant to determine at which temperature pork fat melts best.

Nishida, at the same time, developed equipment to recover lard from tonkotsu soup. He had ramen eateries install the device in their kitchens.

Currently, a total of 3,000 liters of biodiesel from tempura oil and tonkotsu broth is refined daily to power 170 trucks. While a diesel oil delivery tax of 32 yen (28 cents) per liter was previously imposed, the cost has been cut due to use of the green fuel.

As a growing number of automobiles that have recently been marketed cannot run on biodiesel, Nishida Shoun has improved its production method to reduce impurities in its biodiesel, allowing the fuel to likewise be used by those new vehicles.

Chihiro Kondo, an associate professor of machine engineering at Okayama University of Science’s Faculty of Engineering, who is acquainted with biofuel, expressed high expectations for the project.

“The endeavor to retrieve only oil from soup is epoch-making,” Kondo said. “It will also offer a good opportunity for people to become interested in the effective use of waste as well as soup treatment within households. Recovering oil and fat efficiently remains a challenge for the method’s spread, but it will be ideal if it is used nationwide.”