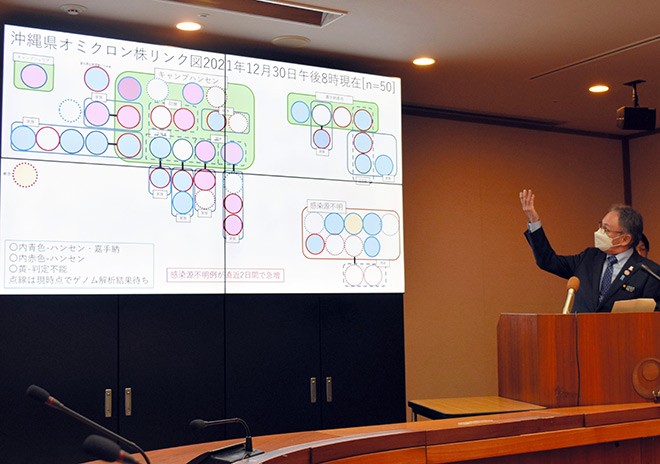 Okinawa Governor Denny Tamaki explains the spread of Omicron in the prefecture during an emergency news conference at the prefectural government building on Jan. 2. (Mika Kuniyoshi)

For the most recent week, the prefecture has averaged 17.37 new infections per 100,000 people, the worst ratio in the nation, prefectural officials said.

And those numbers do not include infections among U.S. military personnel in the prefecture.

An infuriated Okinawa Governor Denny Tamaki blasted the U.S. military for failing to contain the spread of the novel coronavirus and allowing the Omicron variant to spill over to the civilian population.

“I am outraged because the sharp increase in the number of infected among U.S. military personnel suggests that their management is insufficient,” Tamaki said at a news conference on Jan. 2.

He renewed his call for U.S. military authorities to implement thorough measures to rein in the virus.
U.S. forces reported 70 new COVID-19 cases among personnel stationed in Okinawa Prefecture on Jan. 2, a day after confirming a record 235 new infections.

But U.S. authorities would not give the prefectural government further details, such as whether the highly transmissible Omicron variant is responsible for the new infections.

“I urge both the Japanese and U.S. governments to have a strong sense of alarm that (the prevalence of the virus is caused by) a systemic problem,” he said.
SOFA remains unchanged since it went into force in 1960.

The governor said the prefecture’s study confirmed a total of 45 new Omicron infections on Dec. 31 and Jan. 1.

Of those cases, 29 are believed to be community infections, given that the patients had no history of recent travel overseas and no contact with people working at U.S. bases.

Omicron was also confirmed among Japanese employees working at U.S. bases where outbreaks of the strain have been reported.

The study involving genome sequencing with assistance from the National Institute of Infectious Diseases in Tokyo.

The number brings total Omicron cases in Okinawa Prefecture to 65, including 31 through community infections, according to prefectural officials.