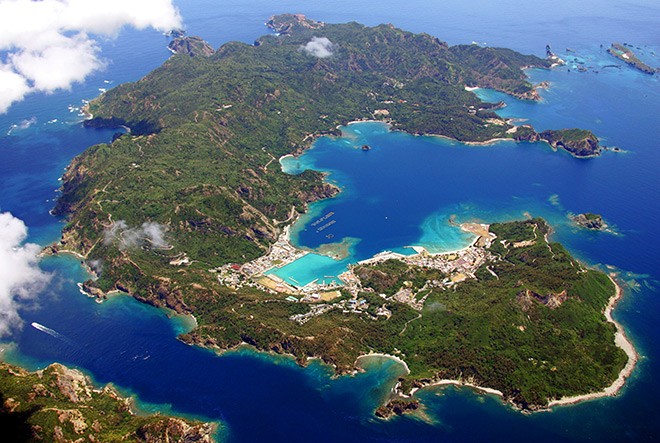 An aerial view of Chichijima island in the Ogasawara archipelago, which is listed as an UNESCO World Natural Heritage site (Asahi Shimbun file photo)

An earthquake with an estimated magnitude of 6.1 struck off the coast of Chichijima island, part of the Ogasawara archipelago south of Tokyo, at 6:08 a.m. on Jan. 4, the Japan Meteorological Agency said.

It registered an upper 5 on the Japanese seismic intensity scale of 7 on Hahajima island and 4 in Chichijima island.

The earthquake had a focal depth of about 77 kilometers, officials estimate.

The agency said there was no risk of tsunami. There were no reports of injuries or significant structural damage as of 7 a.m., Tokyo police and firefighters said.

The Ogasawara islands are located about 1,000 km south of the capital and are administered by the Tokyo metropolitan government. Ogasawara village in the chain has a population of about 2,500 people.

The last time an earthquake of this size hit the area was when a temblor struck west of the chain in May 2015, leading to shaking of an upper 5 intensity on Hahajima island.