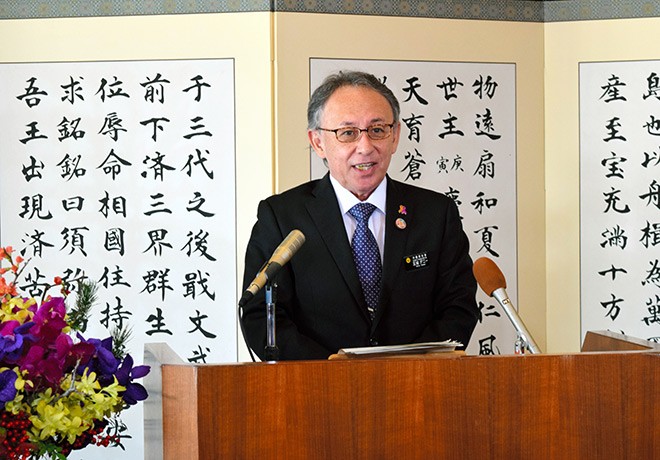 Okinawa Governor Denny Tamaki addresses employees at the prefectural government office in Naha on Jan. 4, his first day back to work after the New Year break. (Mika Kuniyoshi)

NAHA--Governor Denny Tamaki referred to 2022 as being a “milestone year” as Okinawa gears up to mark the 50th anniversary in May of the return of the prefecture’s sovereignty to Japan.

Tamaki was speaking to staff at the prefectural government office on his first day back at work Jan. 4 following the year-end and New Year break.

Okinawa hosts almost 70 percent of all U.S. military facilities in Japan, which remains a very sore point among the vast majority of the local population.

Tamaki also vowed to redouble his efforts to get the central government to relieve this “excessive burden.”

His speech covered a range of issues: addressing appalling child poverty in the prefecture; revitalizing Okinawa’s tourism industry still reeling from the impact of the COVID-19 pandemic; cases of community transmission in Okinawa of the COVID-19 Omicron variant; and incidents involving U.S. bases in general.

He started out by noting that community transmission of the Omicron variant, which is thought to have originated from the U.S. Marine Corps Camp Hansen base in the prefecture, started to surge during the year-end and New Year holidays after a lull in novel coronavirus cases.

Referring to accidents, incidents and environmental damage related to the U.S. bases, he declared: “This year is a milestone year (for Okinawa). I will call on the central government to relieve the excessive burden placed on Okinawa by the existence of the U.S. military bases, as well as making an all-out effort to solve issues related to the bases.”

In fiscal 2020, Okinawa bore the brunt of one of the worst COVID-19 surges in Japan. Tourist numbers plummeted by almost 73 percent compared with fiscal 2019, marking the biggest decline since 1972 when the United States handed back sovereignty of the prefecture to Japan.

Tamaki made clear his other priorities lay in rebuilding Okinawa’s battered tourism industry and tackling unemployment.

Addressing child poverty in the prefecture, which is said to be the worst in Japan, Tamaki said he aimed to create a society in which children can grow up with dreams and hopes for their future, regardless of where they came from.

Okinawa experienced a major cluster outbreak of COVID-19 at Camp Hansen in mid-December. By Jan. 3, a total of 832 cases had been confirmed at nine U.S. bases in the prefecture.

Cases of the Omicron variant among local residents, which started with a Japanese man working at Camp Hansen, now total 88. On Jan. 3, the number of COVID-19 cases among Okinawa’s residents climbed to 130, again the worst record among the nation’s 47 prefectures.