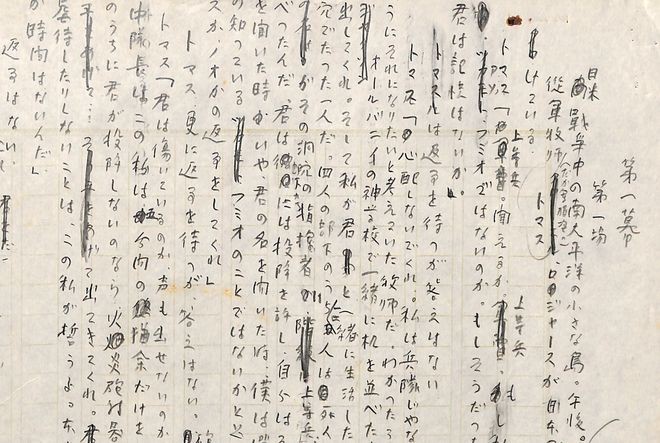 NAGASAKI--Manuscripts of three unpublished plays by acclaimed “Chinmoku” (Silence) author Shusaku Endo were recently discovered in a museum here devoted to his works.

Each play focuses on his recurring theme of “the Japanese and Christianity,” officials said Dec. 28 in announcing the find at the Endo Shusaku Literary Museum.

Last year marked the 25th anniversary of Endo’s death at the age of 73.

The three plays are: “Kirishitan Daimyo Konishi Yukinaga: ‘Tetsu no Kubikase’” (Christian feudal lord Konishi Yukinaga: iron collar), “Watashi ga Suteta Onna” (The woman I left behind), both adapted from earlier works, and “Zennin-tachi” (Good people), which is set in the United States just prior to the outbreak of the Pacific War.

“The plays are as good as his others in terms of the level of completion and content,” a museum official said.

The story of “Zennin-tachi” begins when a Japanese person who attends a seminary visits a Christian family.

It deals with Endo’s lifelong quest to understand the conflict between war and Christian faith.

“It is a piece of work that reflects the essence of the main themes in Endo’s literature,” a museum curator said.

A handwritten draft and a clean copy of each title were also found.

Officials noted traces of additions and corrections made by Endo, but no publisher’s seal was evident, suggesting the author regarded them as unfinished works.

Judging from the age of the manuscripts and entries in his diaries, “Tetsu no Kubikase” is thought to have been penned in or after 1975, while the other two plays are believed to have been written in or around 1979.

Before the discovery, only seven plays by Endo were known. All of them are included in anthologies of his complete works. One of them is “Kigeki: Shin Yotsuya Kaidan” published in 1974 and believed to be his last play.

The latest discovery confirms that he had continued to write plays, according to the museum, which is now in the process of examining 30,000 sheets of written materials donated by Endo’s family.

In 2020, the manuscript of an unpublished novel titled “Kage ni Taishite” (To a shadow) was discovered.

“I think he wanted to write plays in which drama is created through the conflict of characters’ thoughts and ideas to clearly present his lifelong themes,” said Michihiro Yamane, a professor at Notre Dame Seishin University in Okayama known for his research on Endo.

Yamane also cited the fact that Endo held Hiroshi Akutagawa, who staged his plays, in high regard.

“I think they were written in hope of Akutagawa’s recovery from illness but remained unpublished after Akutagawa’s death in 1981,” he added.

The three plays are currently on display at the museum.

They will be published in Shosetsu Shincho and other magazines through February, with an independent book scheduled to be released from Shinchosha Publishing Co. in March.