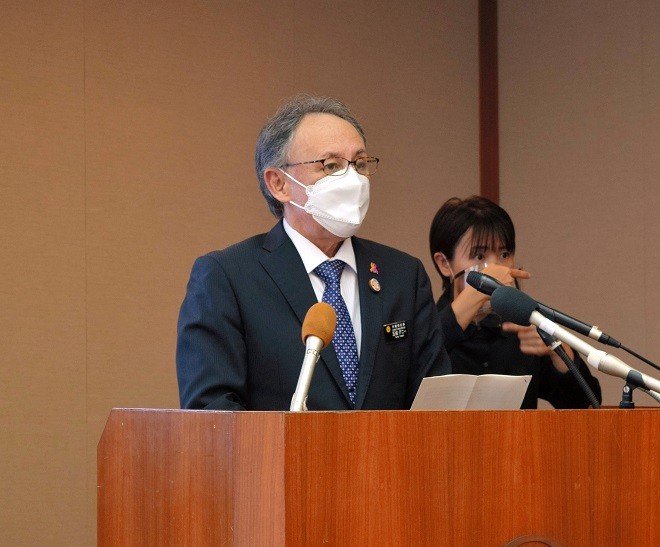 Okinawa Governor Denny Tamaki tells a news conference in Naha on Jan. 4 that he believes the sixth wave of COVID-19 has hit the prefecture. (Mika Kuniyoshi)

NAHA--Okinawa Governor Denny Tamaki said he is considering asking the central government to declare pre-emergency measures to stem the latest surge in novel coronavirus infections in the prefecture.

Tamaki told a news conference on Jan. 4 that he believes the sixth wave of COVID-19 has already hit Okinawa Prefecture.

“The Omicron variant has spread astonishingly fast,” Tamaki said. “We would like to consider toughening our measures before consecutive holidays, including Coming-of-Age Day (on Jan. 10).”

Chief Cabinet Secretary Hirokazu Matsuno told the governor that the central government would “promptly consider” any official request for “manen boshi” (prevention of the spread) measures for the prefecture.

The central government is preparing to declare the measures for Japan’s southernmost prefecture within this week.

In a rare move, the Okinawa prefectural government on the morning of Jan. 5 announced a preliminary figure of around 600 for new COVID-19 cases in the prefecture.

The prefecture on Jan. 4 reported 225 new COVID-19 cases among local residents, the first time since Sept. 16 for the civilian infection number to top 200.

On Jan. 3, the number of COVID-19 cases among Okinawa’s residents climbed to 130, the most among Japan’s 47 prefectures.

For the week through Jan. 3, Okinawa averaged 25.79 new infections per 100,000 people, much worse than the nationwide average of 2.53, according to the prefecture’s data.

Okinawa officials also said on Jan. 4 that 164 new infections were confirmed among U.S. military personnel based in the prefecture.

So far, 996 cases of COVID-19 have been reported among U.S. military personnel at nine bases in the prefecture since a cluster outbreak occurred at the U.S. Marine Corps Camp Hansen in Kin in mid-December.

A Japanese man working at Camp Hansen was the prefecture’s first confirmed case of infection with the Omicron variant.

The strain has now infected 135 residents in the prefecture, including 47 confirmed on Jan. 4, Okinawa officials said.

Twenty-three of the 24 Omicron-infected islanders confirmed on Jan. 3 likely caught the virus through community transmission, the officials said.

Based on genome analysis and other data, the Okinawa prefectural government believes the Omicron variant originated from a U.S. military base and has spread in the prefecture.

Hokkaido and Nagasaki Prefecture confirmed their first Omicron infections that day, meaning the variant has spread to 30 prefectures, according to Asahi Shimbun calculations.

(This article was written by Mika Kuniyoshi and Junya Sakamoto.)