A plea for action by the nuclear powers, not more words 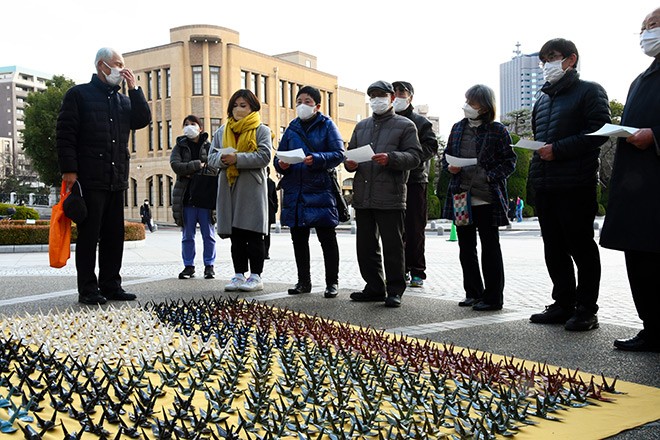 Atomic bomb survivors and experts were generally receptive to a Jan. 3 joint statement by the five established nuclear powers on reducing the threat of nuclear war, but called for action, not just words.

China, France, Russia, Britain and the United States, which are all recognized as nuclear weapons states under the Nuclear Nonproliferation Treaty (NPT) and are permanent members of the U.N. Security Council, said they “consider the avoidance of war between Nuclear-Weapon States and the reduction of strategic risks as our foremost responsibilities.”

Masao Tomonaga, honorary director of the Japanese Red Cross Nagasaki Genbaku Hospital who was in Nagasaki at the time of the city’s atomic bombing on Aug. 9, 1945, said: “I would like to welcome the expression of the will of the five nations to not enter into a nuclear war. We cannot move forward if we do not believe.”

But Tomonaga, 78, said the next step would be even more important and called for “narrowing the role of nuclear weapons by, for example, declaring no first-use of such weapons.”

Toshiyuki Mimaki, who is 79 and heads the Hiroshima Prefectural Confederation of A-bomb Sufferers Organizations, welcomed the fact that the five nations, despite differences in ideology and approach, were at least in agreement on the need to avert nuclear warfare.

But he added that “Japan and other nations under the nuclear umbrella must also make efforts” toward nuclear disarmament.

The overriding factor behind the decision to issue the joint statement was the Treaty on the Prohibition of Nuclear Weapons (TPNW), which took effect in January 2021, according to experts.

“With the TPNW taking effect, there would likely have arisen stronger criticism against the nuclear powers at this year’s NPT review conference,” said Mitsuru Kurosawa, professor emeritus of international law at Osaka University who has long been involved in nuclear disarmament talks. “I feel the five nations wanted to deflect the criticism by making the first move and displaying an eager stance toward nuclear disarmament.”

Masakazu Yasui, secretary-general of the Japan Council against Atomic and Hydrogen Bombs (Gensuikyo), noted growing disenchantment in the international community toward the five nuclear powers over their dismissive attitude against the TPNW. He suggested that they had perhaps reached the point where they felt they could no longer ignore calls for action.

“What will be important is for the (nuclear powers) to take sincere action,” Yasui said. “It would be meaningless without real action.”

The Japanese government has yet to make an official comment regarding the joint statement.

But at a Jan. 4 gathering, Natsuo Yamaguchi, the head of junior coalition partner Komeito, said, “Japan must push forward its role of serving as a bridge between the nuclear powers and non-nuclear nations.”

Beatrice Fihn, executive director of the International Campaign to Abolish Nuclear Weapons (ICAN), which won the Nobel Peace Prize in 2017, tweeted Jan. 3: “They write this ‘nice’ statement but doing exactly the opposite in reality. They’re in a nuclear arms race, expanding nuclear arsenals, spending billions on modernizing and constantly prepared to start a nuclear war.”

IMPORTANCE OF A STARTING POINT

The second paragraph of the joint statement begins, “We affirm that a nuclear war cannot be won and must never be fought.”

That phrase was included in the joint statement issued in 1985 after the first summit meeting between U.S. President Ronald Reagan and Soviet General Secretary Mikhail Gorbachev.

Those words would eventually lead to the first nuclear arms reduction treaty between the two nations and the end of the Cold War.

I interviewed Gorbachev two years ago and he repeatedly used those same words to emphasize the need to return to that agreement.

The starting point of that agreement is that the leaders of the United States and Soviet Union were in unison with regard to the goal of eliminating nuclear weapons.

At that time, many dismissed that objective as nothing but a pipe dream and strong resistance emerged among military and business leaders.

But while total elimination of nuclear weapons was not achieved, the two nations did scrap their intermediate-range nuclear weapons and halved the number of their strategic nuclear arms.

The latest joint statement, in effect, expands the 1985 framework to the five nations that have been allowed to possess nuclear weapons under the NPT.

The joint statement can also be read as recognition by the leaders of the nuclear powers that the only path open to them is to return to the goal set in 1985.

At the same time, the joint statement can also be seen as a declaration by the five nations that they will only move forward on nuclear disarmament under the NPT.

They likely had in mind the planned March meeting of the first conference of nations that have signed the TPNW.

The joint statement makes no direct mention of the TPNW, indicating that the five nuclear powers will likely continue to ignore that treaty but display a willingness to enter into nuclear disarmament talks to counter criticism from the nations that pushed for the TPNW.

Even with such moves, there is still major significance in the resurfacing of the 1985 agreement, which was premised on an understanding of the possible damage from nuclear weapons as well as the recognition of the possible benefits for all mankind that went beyond any bilateral confrontation.

That premise has not changed even though the national security environment may be vastly different from nearly four decades ago.

(This section was written by Hideki Soejima, a senior staff writer.)