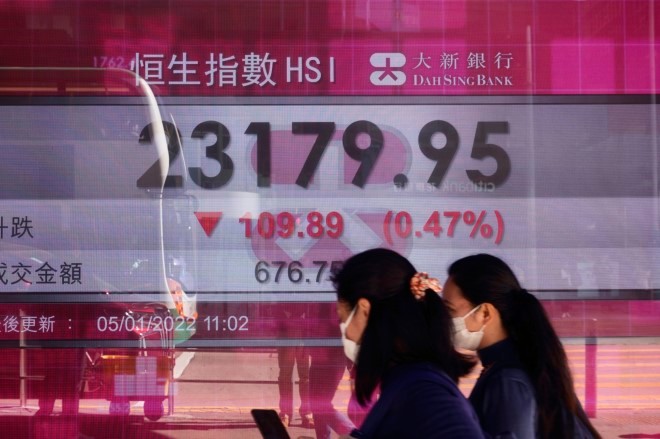 Asian benchmarks mostly slipped Wednesday as technology shares in the region echoed a similar drop in the sector on Wall Street.

Worries continue about COVID-19, as reports of the more contagious omicron keep growing in the region.

In Japan, many people are not heeding warnings to take precautions and crowds have been out at levels close to pre-pandemic levels in Tokyo, where booster shots have barely gotten started. Prime Minister Fumio Kishida has promised to speed them up, starting with medical professionals.

“The region may continue to see increasing omicron virus spreads ahead, but recent manufacturing PMIs seem to be holding up for now. The risk may lie in any further restriction measures, which could cloud the services sector outlook, along with disruption to supply chains,” said Yeap Jun Rong, market strategist at IG in Singapore, referring to purchasing manager indexes, an economic indicator on the manufacturing and service sectors.

A slide in technology stocks left the S&P 500 slightly lower on Wall Street, even as the Dow Jones Industrial Average marked another all-time high.

Banks were among the biggest gainers as bond yields rose, pushing the yield on the 10-year Treasury to 1.65 percent from 1.63 percent late Monday. The yield was at 1.51 percent on Friday. When investors sell bonds their prices fall and their yields rise.

More than 65 percent of the stocks in the S&P 500 rose. Still, the slump in technology stocks, which are the most heavily weighted sector in the benchmark index, left the S&P 500 in the red. Microsoft fell 1.7 percent, Apple slid 1.3 percent and chipmaker Nvidia dropped 2.8 percent.

“Interest-rate sensitive sectors are up and those longer-term growth sectors are down today; not surprising, given the two-day move in the 10-year Treasury,” said Tom Hainlin, national investment strategist at U.S. Bank Wealth Management. “You’re seeing investors price in fairly strong growth in inflation expectations for the future, or at least for 2022.”

Stocks got 2022 off to a good start Monday, with the S&P 500 and Dow setting new highs. A mix of economic data and corporate quarterly earnings reports should give investors some insight into the impact that the coronavirus pandemic and persistently rising inflation are having on companies and consumers.

The job market will be a major focus for investors, starting with the Labor Department’s jobs report for December, which will be released Friday. On Tuesday, the agency’s monthly Jobs Openings and Labor Turnover Survey showed that a record 4.5 million American workers quit their jobs in November, a sign of confidence and more evidence that the U.S. job market is bouncing back strongly from last year’s coronavirus recession.

OPEC and allied oil-producing countries plan to stick with their road map to slowly restore cuts in output made during the depths of the pandemic, including adding 400,000 barrels per day in February.

Some sectors of the economy are still struggling, especially with supply chain problems. Growth in manufacturing slowed in December to an 11-month low, according to The Institute for Supply Management, a trade group of purchasing managers. The organization will release its December report for the service sector on Thursday.

Investors are also anticipating the minutes from the Federal Reserve’s latest policy meeting in December, set for release on Wednesday.

“The big question is how worried is the Fed about inflation,” McMillan said. “We’re really on the cusp of seeing how the Fed is going to move and the minutes will be informative about that.”

In energy trading, U.S. benchmark crude fell 23 cents to $76.76 a barrel in electronic trading on the New York Mercantile Exchange. It gained 91 cents to $76.99 a barrel on Tuesday. Brent crude, the international standard, fell 28 cents to $79.72 a barrel.