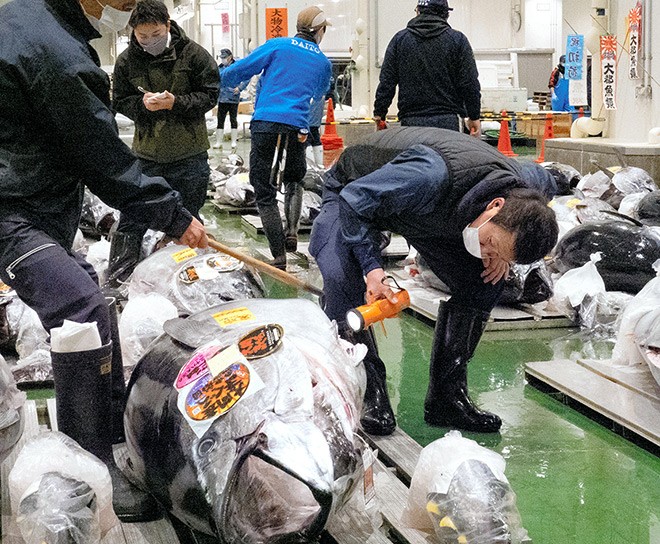 Yukitaka Yamaguchi, president of Yamayuki, looks over a bluefin tuna that he would eventually place a 16.88 million yen bid on. (Provided by intermediary wholesaler)

Sushi magnate Kiyoshi Kimura stunned foodies around the world in 2019 when he paid a record-high 333.6 million yen ($2.9 million) for a single bluefin tuna at the first auction of the year.

Yukitaka Yamaguchi, the president of Yamayuki, an intermediary wholesaler at the Toyosu fish market, paid the most at last year’s first auction, with a bid of 20.84 million yen for a 208.4-kilogram bluefin tuna.

Both Kimura, president of Kiyomura Corp., which operates the Sushizanmai sushi restaurant chain, and Yamaguchi were present at the first auction this year on Jan. 5 at the Toyosu fish market in the capital’s Koto Ward.

But the highest price came nowhere near the record figure from pre-pandemic times.

A surprise strategic decision by both men eased the bidding pressure over the biggest catch. They decided to go after two completely different fish.

The year’s first tuna auctions traditionally ignite high-priced bidding wars because the fish are highly coveted as a sign of good luck. Kimura has also said that paying the highest price brings a great deal of publicity to the Kiyomura restaurants.

The financial incentive behind the bidding wars has little to do with the prized fish themselves.

From a business perspective, it makes little sense to fork out these astronomical amounts for fish with no possibility of recovering the cost. For example, the record price paid out in 2019 amounted to about 1.2 million yen per 1 kg.

And while the fish auction is normally only open to intermediary wholesalers at Toyosu, the Kiyomura chain has managed to elbow its way into the action by obtaining a special auction participation license.

Intermediary wholesalers will turn around and sell the fish to sushi and other restaurants both in Japan and abroad.

The bluefin tuna auction is handled by five major wholesalers that gather the fish from around the world.

Each company ranks all the fish they provide at the first auction and the high-price bidding focuses on the No. 1 bluefin tuna supplied by each of the five wholesalers.

Last year’s top-prized tuna was caught off the coast of Oma, Aomori Prefecture, a fishing ground that invariably provides the bluefin tuna that attract the most attention at each year’s first auction.

This year, three of the wholesalers gave the No. 1 label to tuna caught off Oma. A 211-kg fish from Oma ended up with the top billing.

Yamaguchi and Kimura had both been eyeing up the same fish before the auction began. But when the bell rang signaling the start of bidding, their eyes were fixated on different ones.

Yamaguchi was still aiming for the biggest, the 211-kg tuna. But Kimura was suddenly interested in one weighing 173 kg.

Normally, the Yamayuki wholesaler would not be able to sell the fish it acquires at the auction to outside restaurants. But it entered the extravagant price bidding because it was asked to do so by Hiroshi Onodera, chairman of the Ginza Onodera sushi restaurant that also has outlets in New York and Honolulu.

Even though the two competitors were now eying different fish, Yamaguchi was still nervous because he wanted to gain the honor of paying the highest price, as requested by Onodera.

Kimura met with reporters after this year’s auction and said that he was focusing more on quality rather than just paying exorbitant prices.

(This article was written by Noriyasu Nukui and Kayoko Sekiguchi.)