Water could be causing mystery quakes, land rise in Ishikawa 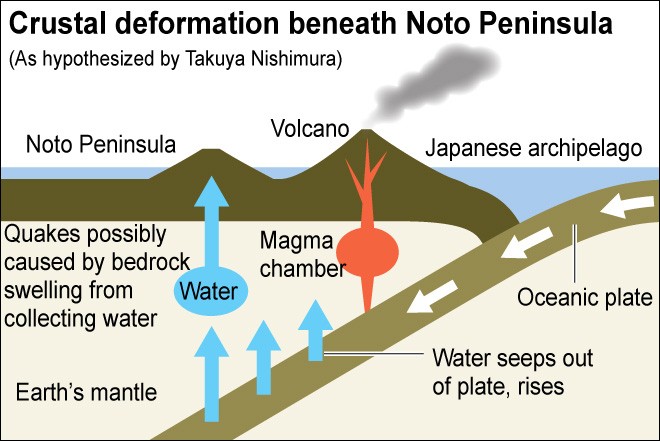 For a year, dozens of earthquakes have rattled the Noto Peninsula in Ishikawa Prefecture while crustal deformations continue—and scientists still do not know why this is happening.

“We have no clear idea why the seismic activity and the crustal movements are going on,” Naoshi Hirata, head of the government’s Earthquake Research Committee, said after a committee meeting in December. “Something we have never experienced could be taking place.”

The Geospatial Information Authority of Japan said the ground has continued rising since around December 2020 in Suzu at the tip of the Noto Peninsula. In one location, the accumulated land uplift has reached about 3 centimeters.

The Kanazawa Local Meteorological Office said 69 quakes measuring at least 1 on the Japanese seismic intensity scale of 7--the smallest class that can be felt by humans—struck the area between January and Dec. 22 last year. One temblor registered a lower 5 intensity on Sept. 16.

The count exceeds 3,000 for all temblors measuring magnitude 1 or greater, regardless of whether they were felt.

Typically, a big quake is followed by a series of aftershocks, which occur less often over time, said Takuya Nishimura, an associate professor of geodesy with the Research Center for Earthquake Prediction under Kyoto University’s Disaster Prevention Research Institute.

“But (the quakes in Noto) are dragging on for so long,” he said. “The only way to explain that is to assume that certain forces continue to be applied beneath the surface.”

So what is taking place underground?

Joint GPS monitoring by Kyoto University and Kanazawa University has shown the Earth’s crust has swollen at depths of 10-15 kilometers beneath the seismic source areas since the onset of the crustal deformation. That indicates something has gathered there in large quantities.

Nishimura said he believes that “something” is water.

A possible source of the water is the oceanic tectonic plate, which is moving from beneath the Pacific and subducting toward greater depths beneath the Japanese archipelago.

Seawater enters cracks in the rock when a tectonic plate is part of the seabed. The plate also contains water of crystallization structurally included in minerals.

When the tectonic plate sinks, it brings most of the water content deeper into the Earth’s interior.

Part of the water may have separated, for an unknown reason, at a depth of about 250 km and risen to 10-20 km beneath the surface, Nishimura said.

Another example of “something” collecting beneath the surface would be a magma chamber under a volcano. There are, however, no volcanoes near the Noto Peninsula, so such a subterranean phenomenon is unlikely, Nishimura said.

An inflow of water was also proposed as a possible cause of the Matsushiro Earthquake Swarm, which started in August 1965 and lasted for about five years in Nagano Prefecture.

More than 60,000 perceptible earthquakes occurred over the five years, the largest one measuring magnitude 5.4.

It is believed that water rose from greater depths and seeped into the bedrock, thereby weakening it and inducing the quakes.

The swarm was also accompanied by a 1-meter uplift of a mountain and a phenomenon called “water eruptions,” or water gushing out of the ground.

But no simple analogy seems to work here.

The seismic sources of the Nagano swarm were less than 10 km deep, whereas the quakes have deeper origins in the Noto swarm.

It is also unknown if the Noto quakes can be attributed to the same mechanism that was at work in Nagano or to a water-induced reassignment of forces being applied on the bedrock in the area.