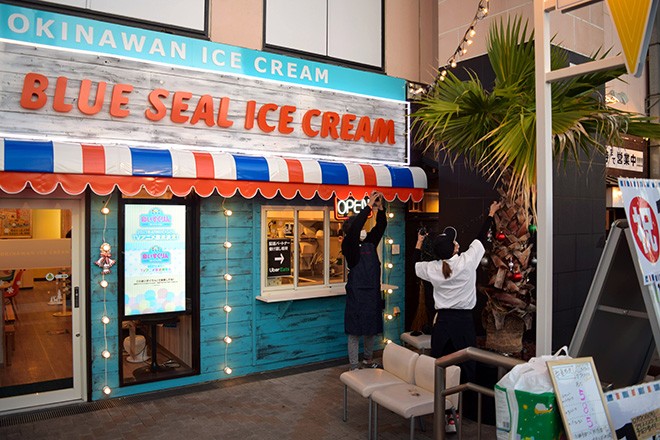 The longer-term strategy of Urasoe-based Foremost Blue Seal Ltd. is to appeal to “Okinawa lovers” in hopes of bringing tourists back to the southern island prefecture after the health crisis is over.

“If we become an ice cream brand cherished by locals, tourists will also buy it,” company President Ryuji Yamamoto said. “We want to connect Okinawa and the rest of the country with ice cream.”

On Dec. 16, the company opened a Blue Seal outlet in the Esca underground shopping mall in front of Nagoya Station. Although the area is lined with restaurants offering local specialties, the ice cream shop stands out with its bright exterior, particularly its eye-catching blue and orange logo.

About 20 customers lined up at the shop around 6 p.m. to choose from among 30 flavors from Okinawa Prefecture, such as salt cookie and sugar cane.

“I hardly have a chance to taste it,” said a man in his 20s who ordered the “beni-imo” purple sweet potato flavor.

Blue Seal ice cream was originally created inside a U.S. military base after World War II before retail sales to Okinawan locals began in 1963. The slogan for the brand is, “Born in America, raised in Okinawa.”

Most Blue Seal products are now made at a factory in the prefecture. In light of Okinawa’s hot and humid climate, the ice cream is made with vegetable oil to yield a refreshing texture.

But the pandemic has dealt a severe blow to tourism in Okinawa Prefecture as well as to Blue Seal sales.

In 2020, the number of tourists to the prefecture plummeted by 63 percent year on year to 3.73 million.

“I realized that our business had been supported by tourists,” Yamamoto said.

Foremost Blue Seal had operated mainly in Okinawa Prefecture, but it has set up 17 outlets outside the prefecture since 2020, when the pandemic broke out.

It now has 24 shops outside Okinawa Prefecture, compared with 16 within the prefecture.

Because the company cherishes its products as “Okinawa's indigenous ice cream,” it recruited franchisees in the mainland under one condition: They must be lovers of Okinawa and Blue Seal.

“We want to increase opportunities for our customers to ‘feel’ Okinawa and be happy. And we want them to come to Okinawa when the pandemic settles down,” said Kenji Matsumura, chief of the store management department.

Joji Takayama, 42, who runs the shop, started ordering Blue Seal ice cream for his restaurant chain after he visited Okinawa Prefecture with his employees about 10 years ago.

“I want to promote Okinawa through ice cream,” he said.