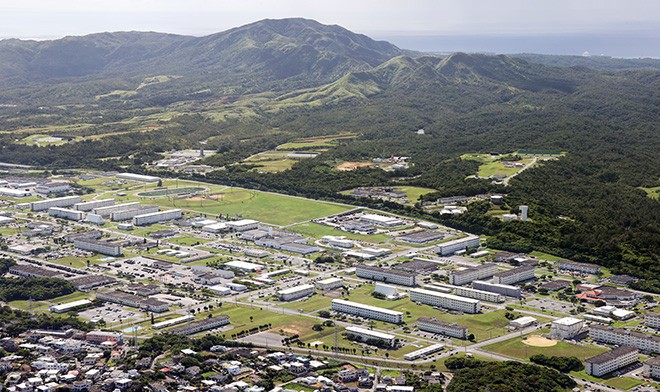 After seeing what has happened in Okinawa Prefecture, communities near U.S. military facilities on other parts of Japan are bracing for accelerating surges in novel coronavirus infections.

Municipal leaders fear the virus, particularly the highly contagious Omicron variant, has already escaped from the bases and is spreading to residents in surrounding areas.

Infection numbers have been soaring in Okinawa Prefecture since a large-scale infection cluster was reported at the U.S. Marine Corps Camp Hansen in Kin in mid-December.

Okinawa Governor Denny Tamaki on Jan. 6 told reporters the prefecture is expected to confirm about 980 new COVID-19 cases, the most since Aug. 25, 2021, when the prefecture was under a state of emergency.

The number does not include people related to U.S. military bases, Tamaki noted.

And like Okinawa Prefecture, other local governments are facing difficulties in getting detailed information about the infections from the U.S. military. For now, the only thing local officials can do is ask the United States for stronger anti-virus measures.

In Yamaguchi Prefecture, 325 residents contracted the virus over the two-week period to Jan. 5, including 230 who live in Iwakuni, where the U.S. Marine Corps Air Station Iwakuni is located.

The U.S. military on Jan. 6 said 115 people connected to the air station were confirmed infected with the novel coronavirus, following 182 reported the previous day.

So far, 786 people at the base have tested positive for the virus.

Yamaguchi prefectural government officials suspect that many of those people had frequented bars and restaurants around Christmas time and spread the virus to residents.

Iwakuni Mayor Yoshihiko Fukuda said at a news conference that a Japanese employee at the base who contracted the Omicron variant and a restaurant employee shared the same type of virus genome.

“It is likely that the Omicron variant inside the base has leaked to the community,” Fukuda said.

The city has postponed a coming-of-age ceremony because of the rise in infection numbers.

Fukuda and Yamaguchi Governor Tsugumasa Muraoka submitted a letter to the Foreign Ministry, the Defense Ministry and the Iwakuni air station, asking for strengthened anti-infection measures, such as wearing masks outside the base and conducting more polymerase chain reaction (PCR) tests.

Officials of the U.S. Navy Sasebo Base in Sasebo, Nagasaki Prefecture, said that 16 personnel contracted the virus each on Dec. 28 and Jan. 5.

In late December, a female employee in her 40s at the base and three members of her family were confirmed infected.

“People connected to the base who went home for Christmas have returned,” said a representative of a union for base employees. “We want to pay close attention to the situation so that it won’t become like Okinawa.”

The Yokota Air Base in western Tokyo on Jan. 5 announced that 65 people related to the base have contracted the virus, including 57 cases confirmed between Dec. 29 and Jan. 5.

The number has rapidly increased, officials said, noting that 30 of the 57 infected people tested positive upon entering Japan.

A liaison council consisting of officials of Tokyo and six surrounding municipalities on Dec. 28 asked the base to thoroughly implement measures to prevent the virus from spreading.

The council is expected to repeat the request in writing by the end of this week because of the recent surge in new cases.

At the Misawa Air Base in Misawa, Aomori Prefecture, 82 people related to the base had contracted the virus by Jan. 3.

According to city officials, the U.S. military has yet to offer details about how many cases involve the Omicron variant.

City officials said on Jan. 5 that a woman in her 30s related to the base was confirmed infected with the Omicron variant, possibly by another person connected to the base.

Over the eight-day period to Dec. 30, 75 people were confirmed infected at the Yokosuka Naval Base in Yokosuka, Kanagawa Prefecture, including 69 who recently entered Japan, base officials said.

After city officials asked the U.S. military to prevent the virus from spreading, the top official of the base on Jan. 4 told the Yokosuka mayor that the alert will be raised to a higher level.

The Naval Air Facility Atsugi in Ayase, Kanagawa Prefecture, on Jan. 5 announced that 69 people related to the base were confirmed infected. Forty-two of them tested positive at airports upon entering Japan.

The U.S. Marines’ Camp Fuji in Gotenba, Shizuoka Prefecture, on Jan. 5 said 46 people had tested positive there since late December.

As of Jan. 5, 1,001 people related to the U.S. military were confirmed infected at nine bases in Okinawa Prefecture.

Japanese employees at Camp Hansen have been infected with the Omicron variant, and other residents are believed to have caught the strain through community transmissions.

Although the U.S. military has reported a daily tally of new COVID-19 cases in Okinawa Prefecture, it has withheld certain details because they are “related to operations.”

“A major cause of the spread of the Omicron variant is that it has steeped through the U.S. military,” Governor Tamaki said.

Tamaki has urged the Japanese and U.S. governments “to have a strong crisis awareness” and called for a fundamental review of the agreement.