Oldest tramcar back in business in Osaka after refurbishment 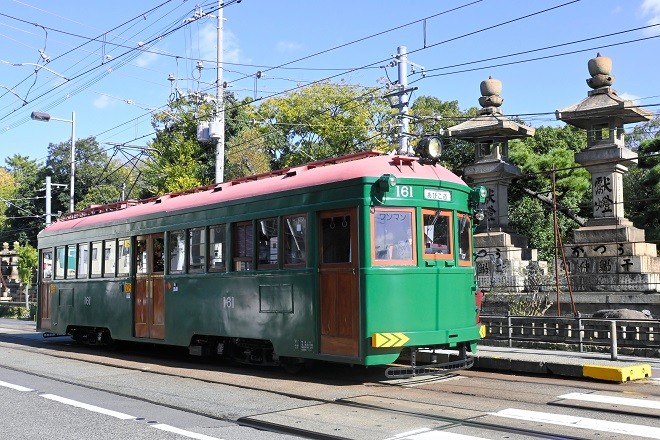 OSAKA--Japan’s oldest tramcar is again periodically gracing streets that connect the southern part of this bustling metropolis and the neighboring city of Sakai after a major refurbishment.

Mo-161 series tramcars were equipped with cutting-edge systems when they first went into service, which allowed control of the motor mounted on the rear car from the operator’s cab in the front car when two tramcars were connected.

The body is built with a combination of iron plates and wood.

After the restoration, it operated mainly during New Year holiday periods and for chartered services.

However, more restoration was deemed to be an urgent task because the wooden doors, window frames and other parts were beginning to corrode.

The company mounted a crowdfunding campaign to cover the repair costs and raised about 14 million yen, or nearly double the amount initially expected.

The renovated Mo-161 tramcar ran through the streets of Osaka and Sakai on Dec. 2.

Rail buffs were out in force to shoot photos of the tramcar while passengers also snapped pictures of its interior with their smartphones.

“We want you to enjoy the old ambience,” said Takaaki Matsumoto, who works at Hankai’s marketing division. “We need your support to celebrate its 100th birthday.”

The tramcar will continue commercial operations on a day-to-day rotating basis until the end of February for the time being. It will periodically be taken out of service for checks and general maintenance.