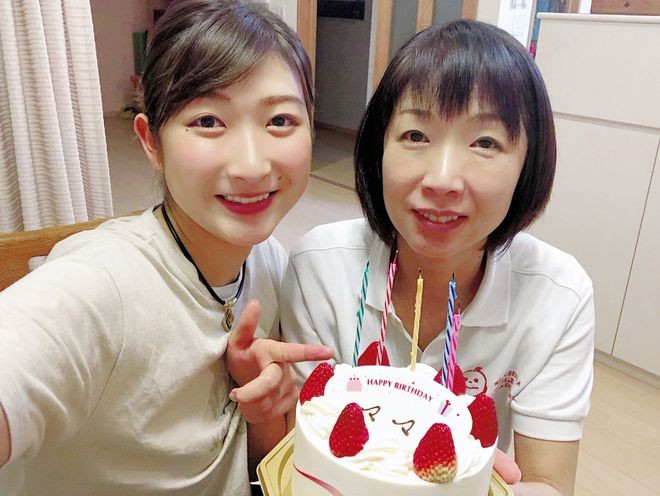 Rikako Ikee and her mother, Miyuki, at a birthday party in 2018 (From Miyuki Ikee’s book)

In the sports comeback story of 2021, Japanese swimming superstar Rikako Ikee made an inspiring return to compete in the Tokyo Olympics after her long treatment for leukemia.

Ikee, 21, could not have made her successful attempt without the support and strong mind installed in her by her mother, Miyuki.

Now, Miyuki has released her book on how they lived together and how she raised Rikako.

Her book, titled “Akiramenai ‘Tsuyoikokoro’ wo Motsutameni” (To Have Strong Minds Without Giving Up), was published by Ascom Inc. in November.

Miyuki, a single mother who runs a school for children, has many things to tell the child-rearing generation through her book.

Miyuki raised her three children with the hopes that “they keep strong minds without giving up as well as kind minds.” She felt that Rikako grew up with both kinds of minds.

In February 2019, Rikako, her second daughter, was diagnosed with acute lymphatic leukemia. She was 18 at the time and already a record-breaking swimmer in the sport.

Rikako had competed at age 16 in the Rio de Janeiro Olympics. As she was preparing with an eye on the Tokyo Games in 2020, the news of her illness shocked and saddened her many fans in Japan and across the world.

Rikako was forced to undergo nearly a year of chemotherapy and other treatments, which sapped her strength.

“I just stood by her, cheered her up and encouraged her. If I cried, I would have made her suffer more,” Miyuki said. “I was trying to behave like an actress.”

The unforeseeable battle against the disease was hard on both mother and daughter, but Rikako refused to collapse into tears or offer any negative comments.

One day, when Rikako received massages from her trainer, she said, “Could you do this for my mother, too?”

After Ikee received treatment for about 10 months, she returned to competition, made the Japanese team and competed at the Olympics in Tokyo.

Miyuki’s oldest daughter, 28, and her 24-year-old son are working while Rikako is continuing her training toward the Paris Olympics in 2024.

With her children now living on their own, Miyuki wanted to give something back to society.

She compiled the book by incorporating her own educational methods and child-rearing experiences.

For example, she said that it is important to continue to give positive comments, such as “You can do it,” to children and not to deny their dreams.

Miyuki said that “there are more important things than becoming No. 1” in sports or other fields.

Her three children all learned to swim, but she did not compare them with other children and did not deny their efforts. She did not say anything about the contents of their training or results they were achieving.

She always told Rikako, “You can quit at any time.”

She has told her children that they should make efforts toward achieving their goals rather than chasing only results and wanted them to learn good manners and cooperation along with nurturing a human nature loved by others.

Miyuki said that “children need to believe in themselves” to build strong minds without giving up.

She said that the experiences Rikako suffered in her fight against leukemia “can be considered as an event to make one grow up and that such a way of living could be also a kind of strength.”