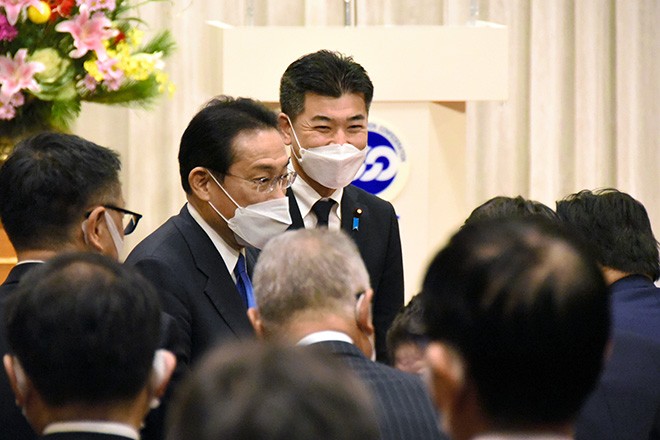 Prime Minister Fumio Kishida attended a New Year gathering of Japan’s largest labor organization, a move that political pundits viewed as an attempt to drive a wedge between opposition parties in the lead-up to the Upper House election this summer.

Kishida used his time at the Jan. 5 gathering to seek support from senior officials of Rengo, the main support group of the Constitutional Democratic Party of Japan and the Democratic Party for the People, while CDP leader Kenta Izumi and DPP head Yuichiro Tamaki were within earshot.

“The upcoming Upper House election is extremely important,” Kishida said during his speech at the event held at a hotel in Tokyo’s Arakawa Ward in the late afternoon. “I sincerely ask for your precious understanding and cooperation for the ruling coalition as well from the viewpoint of political stability.”

The government and the labor organization have increasingly warmed to each other since the inauguration of the Kishida administration late last year.

Tomoko Yoshino, Rengo’s first female president, was appointed to sit on a panel headed by Kishida to chart his catchphrase policy of creating “a new form of capitalism.” Yoshino also visited the LDP headquarters in December to meet Taro Aso, the party’s vice president, and Toshimitsu Motegi, the LDP’s secretary-general.

This apparently was done in the expectation that the government would carry out its pledge to help businesses raise wages.

Rengo is seeking a roughly 4-percent pay increase at its “shunto” annual labor-management negotiations in spring. At a meeting of the panel on new capitalism, Kishida said he is counting on companies with improving corporate performance to raise wages by more than 3 percent.

“He is probably thinking that now is the time to win over our support,” said a senior Rengo official.

What the labor organization does will affect how opposition parties cooperate in the Upper House election.

Izumi had expressed his intention to reconsider the alliance between the CDP and the Japanese Communist Party in national elections out of consideration for Rengo, which takes a dim view of such cooperation. For his part, Tamaki is distancing the DPP from the opposition alliance.

The maneuvering could make it difficult for the parties to secure cooperation from the JCP in unifying candidates to consolidate opposition votes in the summer election, thereby creating a possible rift among the opposition parties.

“We will remain committed to supporting the CDP, along with the DPP, (in the Upper House election),” Yoshino said at a Jan. 5 news conference.

But she did not elaborate on Rengo’s relationship with the government.

“We were extremely honored to have the prime minister in attendance (at the New Year gathering),” Yoshino said. “We make policy requests to all parties, except the JCP, and such a relationship will remain unchanged.”

(This article was written by Taro Kotegawa, Tamiyuki Kihara and Tomoya Takaki.)