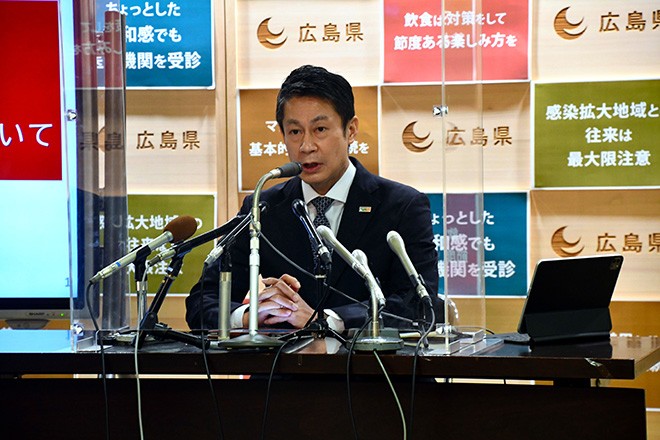 Okinawa, Hiroshima and Yamaguchi prefectures on Jan. 6 formally asked the central government to approve pre-emergency measures to deal with rapid increases in COVID-19 cases, especially of the Omicron variant.

The government task force is expected to approve the requests on Jan. 7 after a panel of experts gives its consent.

The pre-emergency measures will be in place from Jan. 9 until 31 and involve asking bars and restaurants to close early and not serve alcohol. Businesses that cooperate will receive subsidies.

There are differences in geographical coverage among the three prefectures.

Okinawa Prefecture has asked that the entire prefecture be covered by the pre-emergency measures, while Hiroshima Prefecture’s request applies to the five municipalities of Hiroshima, Hatsukaichi, Otake, Fuchu and Kaita.

“A rapid surge in infections unlike anything we have experienced is occurring,” Hiroshima Governor Hidehiko Yuzaki said at a news conference on Jan. 6. “At this pace, we will very quickly see the largest spread of infections. I want Hiroshima residents to begin changing whatever activities they can from today.”

Hiroshima reported more than 100 new COVID-19 cases on both Jan. 4 and 5, and municipal government officials said there were already more than 170 cases as of noon Jan. 6.

The last time Hiroshima had more than 150 cases was Sept. 4.

Yamaguchi Prefecture’s request was made for the two municipalities of Iwakuni and Waki in the eastern part of the prefecture close to U.S. Marine Corps Air Station Iwakuni.

For the two-week period until Jan. 5, about 70 percent of the new infections in the prefecture have been in Iwakuni.

A large number of COVID-19 cases among U.S. military personnel has also been reported at the air station.

Yamaguchi Prefecture has never been covered by pre-emergency measures.