From the jaws of defeat, eels can escape through predators’ gills

A young eel that was swallowed by a predator escapes through one of its gills. (Provided by graduate student Yuha Hasegawa and associate professor Yuki Kawabata at Nagasaki University) 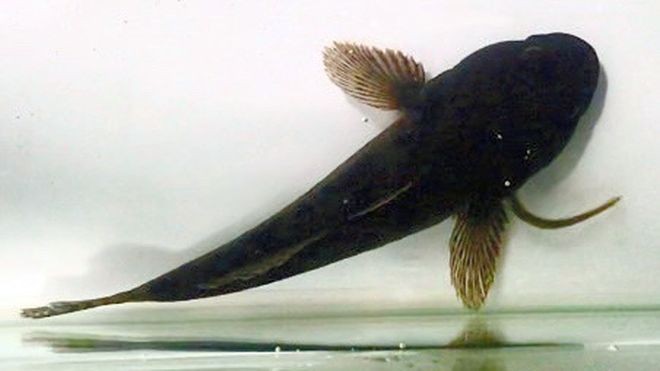 A young Japanese eel, lower right, tries to flee through the gill of a freshwater fish known as a dark sleeper. (Provided by graduate student Yuha Hasegawa and associate professor Yuki Kawabata at Nagasaki University)

Humans are not alone in finding it difficult to catch eels, as new research reveals the elusive creatures can sometimes give underwater predators the slip even after they have been swallowed whole.

A team of scientists from Nagasaki University and the Japan Fisheries Research and Education Agency have documented for the first time young Japanese eels escaping through the gill openings of larger predatory fish.

“Being able to escape even after getting swallowed may be a reason that eels evolved into their thin, slippery form,” said team member Yuki Kawabata, an associate professor of fisheries studies at Nagasaki University.

Kawabata, whose research specialty is how fish and crustaceans flee from predators, was astonished by the discovery. Few instances have been reported worldwide of creatures swallowed whole that have successfully escaped from their predators on their own.

In 2020, Yuha Hasegawa, a graduate student at Nagasaki University, watched as an elver, or a young eel, was put into the same tank as a carnivorous freshwater fish known as a dark sleeper.

The research was being carried out to determine how the eel flees from its natural enemy.

The sleeper had swallowed the eel, but to his surprise, Hasegawa noticed the young eel had eventually reemerged in the tank.

The scientists recorded them with a video camera for closer analysis, and when they played back the footage, they saw the 7-centimeter-long eel that had been swallowed stick its tail out of one of the gills of its larger predator, which measured 15 cm. The eel waved its tail and then completed the narrow escape by jetting out of the opening.

The footage also showed the sleeper did its best to hold onto its lunch by pressing its gill against the tank’s wall to block the eel from making its dramatic escape.

In an experiment that used 54 eels and four sleepers, more than half of the eels swam out of the sleepers’ gills after they were consumed.

The fastest of the escapee eels gave its predator the slip within six seconds of being swallowed. Another took more than two minutes to emerge.

All 28 eels that successfully escaped had thrust out their tails before pulling out the rest of their body.

Shocked by the surprise loss of their hard-won meals, the sleepers did not attempt to catch the fleeing eels again, according to the researchers.

The findings have been published in the U.S. specialized journal Ecology at (https://esajournals.onlinelibrary.wiley.com/doi/10.1002/ecy.3612).