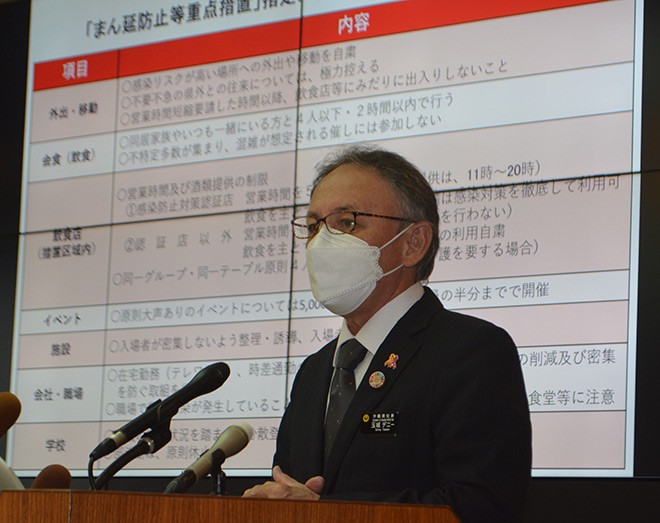 Japan confirmed more than 5,000 new COVID-19 cases on Jan. 7, topping 5,000 for the first time since Sept. 17 last year, as a surging wave of infections continued sweeping across the nation.

Okinawa Prefecture reported a record 1,414 new cases. It was the first time that the number of daily cases, excluding those on the U.S. military bases, exceeded 1,000 in the prefecture.

Two other prefectures to be covered by the government's pre-emergency measures also saw substantial jumps in new cases.

Fresh novel coronavirus cases in Tokyo soared to 922 on Jan. 7.

The figure shot up from 78 cases confirmed on the same day a week ago, increasing roughly twelvefold over the period, metropolitan government officials said.

The Osaka prefectural government reported 676 new COVID-19 cases on Jan. 7. The latest figure topped 600 for the first time since 666 were recorded on Sept. 18 last year.

“It is highly likely that the virus infections will continue to spread, so please take basic anti-virus measures as much as possible,” Osaka Governor Hirofumi Yoshimura told reporters at the prefectural government office.

In Okinawa Prefecture, it is thought that Omicron variant infections are spreading from the U.S. bases to nearby local areas where cases of community transmission are surging.

The prefecture confirmed a record-high 981 new cases on Jan. 6, exceeding the 809 cases recorded in August when the prefecture was under a state of emergency.

The prefectural government was also notified by the U.S. military on Jan. 6 that 162 new COVID-19 cases tied to U.S. military bases in the prefecture were confirmed, totaling 1,160 cases since Dec. 15.

The Japanese government on Jan. 6 asked the U.S. side to restrict off-base outings of personnel associated with the U.S. bases in the prefecture.