Local officials frustrated at lack of help from U.S. bases on COVID 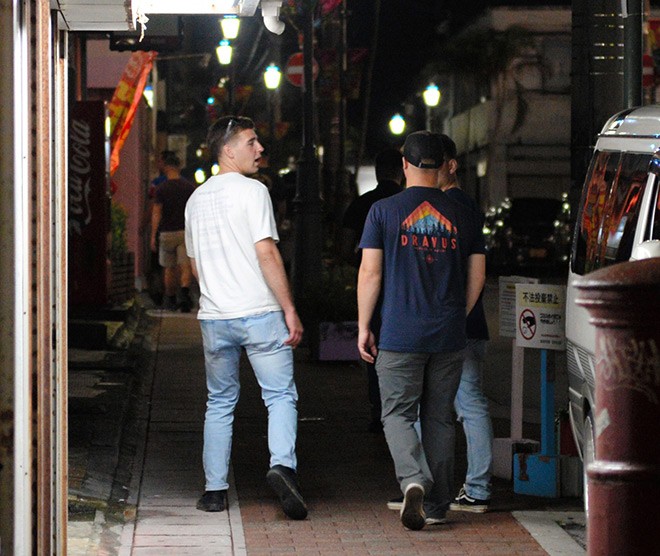 Foreigners walk through an entertainment district near the entrance to Camp Hansen in Kin, Okinawa Prefecture, on Dec. 24. (Shogo Mitsuzumi)

Local government officials across the country are fuming over how the Japan-U.S. Status of Forces Agreement is handcuffing their efforts to fight the spread of the novel coronavirus.

But officials are even more frustrated at the failure of U.S. military officials to share details about those confirmed infected.

Not only has there been a major increase in COVID-19 cases involving U.S. military personnel, but cases are also rising in local communities close to U.S. bases, raising concerns about spillover.

Kanagawa Governor Yuji Kuroiwa said at a Jan. 6 news conference that base officials have not always passed along pertinent information in a timely manner.

“When we think about where the problem lies, we inevitably end up at the SOFA issue,” he said.

Kanagawa is host to several U.S. military bases, including in Yokosuka and Ayase.

A memorandum exchanged in 2013 between Japan and the United States calls for mutual exchange of information regarding infectious diseases confirmed in bases and neighboring communities between the relevant medical care and public health offices as expediently as possible.

Kanagawa Prefecture is not the only local government complaining about failure on the part of the United States to abide by that agreement.

Hiroshima prefectural officials said they have received no information from officials at U.S. Marine Corps Air Station Iwakuni in neighboring Yamaguchi Prefecture, despite Hiroshima concerns that some of their cases have a clear link to ones in Iwakuni city, which borders Hiroshima.

Okinawa prefectural officials also complained that the little information they do receive is often unhelpful.

The section handling infectious diseases received daily reports from U.S. bases in Okinawa even throughout the year-end and New Year’s periods. But the only information passed on was the number of cases at each base.

There was no information that could help Okinawa officials implement measures to prevent infections from spreading in local communities, such as where those confirmed COVID-19 patients resided, when they first showed symptoms or if they had been in contact with any local residents.

That means local government officials have no idea how many U.S. military personnel reside in their communities or where they live. This is a major problem for the Okinawa and Yamaguchi prefectural governments because many Americans reside off base.

U.S. Forces Japan raised its warning level for COVID-19 by one level later that same day.

That move is coupled with new measures that include requiring personnel to wear face masks until an individual is confirmed not infected, mandating that personnel arriving on U.S. military planes directly at bases are tested for COVID-19, and requesting that all those who leave their bases always wear face masks.